Silkmen and their fans celebrate 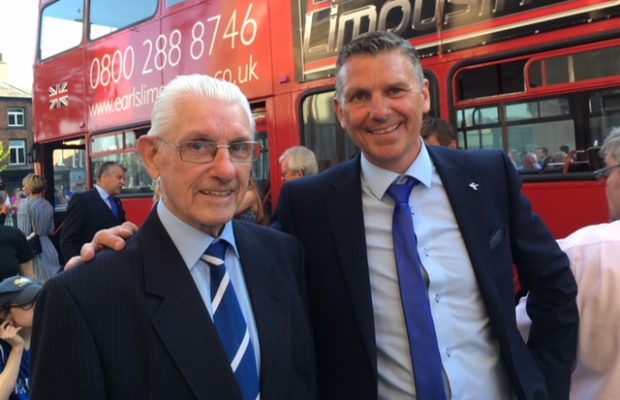 After an absence of 21 years, the players, and management, of Macclesfield Town Football Club finally climbed the thickly carpeted stairs to the function room at the Town Hall again yesterday afternoon.

Fears that an assortment of potentially dangerous celebratory banners, or the lack of a roof on the party bus, might disrupt the proceedings, proved to be another ‘elf ‘n’ safety, overkill. The team bus arrives at the Town Hall.

The cropped top transport arrived safely, and navigated its way through the boisterous crowd in the town centre, whilst from the top deck, the jubilant team, and manager, John Askey, showed off the recently acquired trophy to their adoring fans below.

Andy Worth led the noisy celebrations, and speeches, at ground level, in true Moss Rose fashion, where the volume levels were off the scale.

Team members, and associated individuals then mingled happily with the gathered throng, showing off the impressive trophy, whilst the events were recorded by media, and fans alike, before entering the Town Hall for the official reception. Brief congratulations were given by Lady Mayor Bev Dooley, who needed to be prompted as to who MTFC were, and why they were there, Councillor Gareth Davis, who had to be surgically separated from the hard won trophy, and David Rutley MP, before “Sir” John Askey, the Manager, and architect of Macclesfield’s success, thanked his charges for their performances throughout the season, the Council, and its caterers, for their’s on the day, and expressed the hope that perhaps the success achieved this year might be the springboard to an increasing investment in the club infrastructure, and training facilities, in the near future.

A fine finger buffet was then enjoyed by all, whilst in depth discussions continued as to how, and why, “Roy of the Rovers” had deemed to leave the pages of the “Tiger” comic, and his beloved “Melchester Rovers”, to write the script for Macclesfield Town’s amazing achievement this year.
As fans, and team, had sung long, and loudly, outside earlier, “We’re going up with a tenner in the bank”.