Food Festival for Wilmslow and Alderley 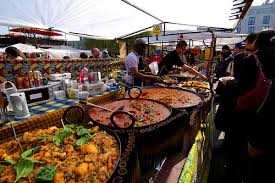 The very first Wilmslow and Alderley Edge Food Festival is free event to celebrate the very finest local food, beer and street food – with over 50 local food and drink producers this event should not be missed.

Budding bakers will be given an opportunity to show off their cooking skills with the Alderley Edge and Wilmslow cake off competition. With a selection of categories, you can obtain a registration form from their website. Winners will be awarded vouchers to spend at the food festival, as well as rosettes and certificates.

Cookery demonstrations which include a demonstration by celebrity chef David Mooney. David is co-owner and Chef Patron at The New Moon Pub Company and has a glittering CV including an apprenticeship with Raymond Blanc and a stint as Commis Chef to Marco Pierre White! Previously Chef Patron of the Belle Epoque in Knutsford, David is recognisable as a media star, with many appearances on television and on radio under his belt. Notably, he was the resident chef on the region’s Granada Tonight programme and made over 200 appearances, as well as hosting the ‘Food Hunter’, in which he travelled throughout the North West cooking up a culinary storm in various locations using locally sourced produce.

The Alderley and Wilmslow Beer Festival and Beer awards, where visitors can sample the best local beers and vote for your favourites.

The very talented and beautiful Sadie Pickering of Alderley’s ‘The Yard’ will be hosting the Open Mic stage.

With over 50 local food and drink producers this event should not be missed.