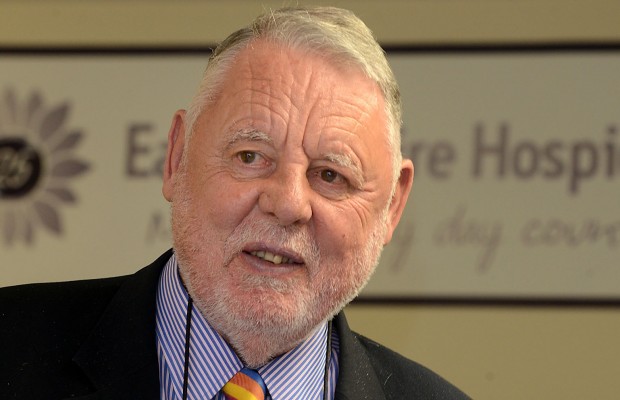 Terry Waite CBE is to make a special visit to Macclesfield Town Hall on Sunday 28th September to tour East Cheshire Hospice Art Fair and give a talk about his experiences as a former Special Envoy to The Archbishop of Canterbury and his time spent as a hostage in Beirut.
Terry Waite spent 1,760 days in captivity before his release in November 1991. Since then, he has become an author, lecturer and patron of several charities, including East Cheshire Hospice for which Art Fair 2014 is a fundraiser.
Terry Waite says: “I am so looking forward to returning to Macclesfield where I was born yonks ago! Perhaps I may meet someone who knew my father, the village policeman in Bollington. Whatever, it will be a pleasure to meet everyone at Art Fair 2014.”
‘Terry Waite Talks’ about:
• Writing without pen or paper and how to keep mentally and physically well during times of extreme stress.
• East Cheshire Hospice and its value as a part of the local community.
He will bring copies of his books Taken on Trust, an account of his five years in captivity, written in his head during that time, and Travels with a Primate, an amusing account of his time spent working with Robert Runcie, Archbishop of Canterbury. Both books will be available for sale and Terry Waite will be happy to sign copies.
Fio Brereton, Chair of Art Fair 2014, says: “I’m really pleased Terry Waite is speaking at Art Fair 2014 – about his time as a hostage and working for the church – but also about what East Cheshire Hospice means to the community. This exhibition is an opportunity for people to come together to enjoy art and conversation, but it’s also about the business of raising money for a very important local charity. We look forward to welcoming visitors throughout the ten days of Art Fair 2014, but especially on Treacle Sunday when Terry Waite CBE will be joining us.”
‘Terry Waite Talks’ takes place at Macclesfield Old Town Hall on Sunday 28th September at 11am. The event is FREE (with donations kindly received) but spaces are limited and will be allocated on a first come, first served basis. Please arrive early to avoid disappointment.

For further information, and to find out more about Art Fair 2014, please visit www.theartofcaring.org.uk