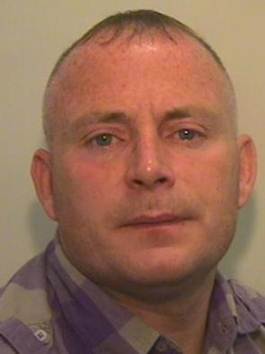 Police are appealing for help to trace a man they would like to speak to in connection with a series of burglaries across Lancashire and Cheshire.  Mark Fitton, 44, from Oldham, is wanted in connection with a number of burglaries which took place throughout Lancashire and Cheshire between October 2013 and February 2014.  He is described as white, 5ft 7in tall, stocky build with short blonde/light brown hair with tattoos of a flower and the name “Lewis” on his right arm and two dice tattooed on his left arm. PC Vicki Jones from East Division Burglary Team said: “We are appealing to anyone who has any information about Mark Fitton or knows of his whereabouts to get in touch with us.” On Friday 6 February three men were sentenced at Preston Crown Court for their roles in the burglaries after pleading guilty to conspiracy to commit burglary. Gary Dunkerley, 43, of Heron Street, Oldham and James McMillan, 29, of Spring Street, Oldham were both sentenced to six years imprisonment while Peter Clarke, 27, of HMP Forest Bank was sentenced to four years eight months imprisonment.  Anybody with information can contact Lancashire Police on 101. Alternatively, they can contact Crimestoppers anonymously on 0800 555 111 or online at Crimestoppers-uk.org. No personal details are taken, information is not traced or recorded and you will not go to court.