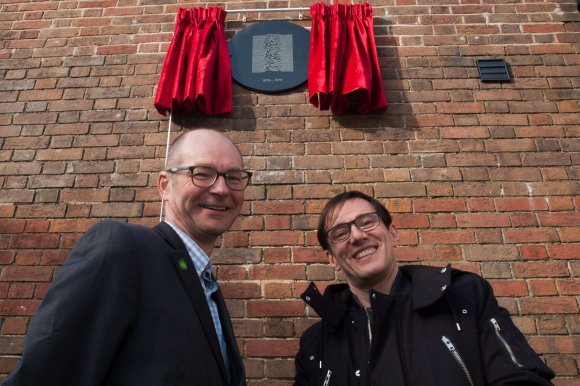 A local housing association paid tribute to a Macclesfield music icon as part of its new development in the town.

Curtis walked to work from his home on nearby Barton Street, only leaving his job after Joy Division became a success. One of Joy Division’s most recognisable songs ‘She’s Lost Control’ was written by Curtis whilst working at the Labour Exchange. It was about a client of his with epilepsy, which Curtis himself went on to develop.

As well as keeping the name the ‘Old Labour Exchange’, the new development features a plaque to commemorate Curtis’ connection with the building.

The stone circle was developed by graphic designer Peter Saville, who was a friend of the band and designed all of Joy Division’s album covers. It is based on the cover of the Unknown Pleasures album, and has the dates 1978-79 on it, which is when Curtis worked there.

The building has been used as offices in the past, but now thanks to Peaks & Plains it has been fully renovated and is back in permanent use. The new apartments are a mix of one and two bedroom homes, many of which will have their own entrances thanks to the distinctive design of the neo-Georgian building. They will all have off road parking, and are available for affordable rent.

Unveiling the plaque at the official opening of the development, Stephen Morris said: “Myself and the rest of the band are very happy that finally there’s a monument in Macclesfield, so near to his house, which is a celebration of Ian’s life.”

Tim Pinder, chief executive at Peaks & Plains and one of housing’s biggest music fans, said: “I am delighted that Peaks & Plains has been successful in rescuing the Old Labour Exchange, not only for the great quality and much needed affordable housing that we’re providing here, but also in having the opportunity to mark its association with Ian Curtis.

“It feels most apt that Ian Curtis’ role here – assisting those with disabilities back into work – is so closely aligned with Peaks & Plains’ purpose which is to Help Improve Lives. It seems most fitting that this link should be behind Macclesfield’s first public permanent recognition of the band.

“We are enormously grateful for the support of Peter Saville, Joy Division’s album sleeve designer for designing the plaque, we unveiled and to Ian Curtis’ bandmate, Joy Division drummer Stephen Morris who unveiled it.”