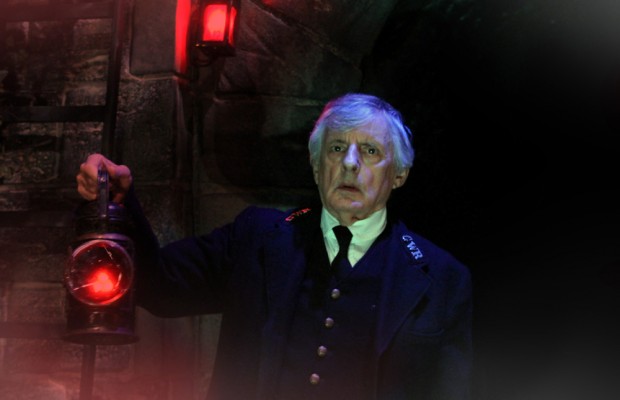 They caught up with the legendary actor Jack Shepherd to talk about his role and critically acclaimed career.

You are appearing in A Ghost Story Double Bill, tell us about your characters? In Charles Dicken’s The Signalman I play the signalman who is haunted by a ghost. The year is 1870 and he’s an aging, self-educated man spending too much time on his own. It’s a very chilling story, with a big sting in the tale! My character in Robert Aickman’s The Waiting Room is a Middle class technocrat (not a nice person) who finds himself deeply haunted.

What devices are used to make it a spine-chilling experience? The sound effects that run throughout are very powerful and very much heighten the drama.

Are you looking forward to visiting the area? Half my family, the Mycocks, are from Matlock. My Great Aunt Ada was a midwife who lived on a farm there and actually delivered me. When she retired she ran a chicken farm but became too tender hearted and last time I visited, the chickens had moved in to the house and were living in the curtain pelmets. I last came to Buxton in 1995, when my wife made a film called Happy Feet about ballroom dancers.

You have enjoyed a glittering career in theatre and television and worked with many legendary actors. What has been your favourite role to date? I am best known for my part in Wycliffe but my biggest achieve was in 1984, when I won a Society of West End Theatre Award (now known as the Olivier Award) for my role as Richard Roma in the play Glengarry. My best experience was performing in The Mysteries in 1977 at the National Theatre – I played all the bad characters – Satan, Judas and Death! The most fun was actually playing Lucifer and his fall from heaven. Playing death is the opposite of a comedian; he comes on stage to frighten the life out of them! You are also a successful playwright, what key element do you need to make a good writer? With a sense of structure you can write anything, without it you’ll struggle.

Having studied drama in what many consider a golden era of theatre; do you think it is harder for current drama graduates to carve a career in acting? It’s much harder now – there are some very ambitious young actors but there’s far more competition for jobs, partly to do with the celebrity culture we have now. In my day you learned in rep after drama school but there are very few rep systems left. Now students get their training on the fringe circuit, which is creative but the survival rate is low.

Tickets for a Ghost Story Double Bill are priced from £16 and £19 and discounts are available. Call 01298 72190 or visit www.buxtonoperahouse.org.uk