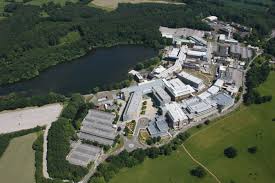 The hi-tech life sciences hub at Alderley Park has been unveiled by the Chancellor as part of a new enterprise zone.

It marks another landmark step forward towards delivering 7,000 new jobs in life sciences at the former AstraZeneca site. In 2012, pharmaceuticals giant AstraZeneca (AZ) announced its decision to relocate its R&D to Cambridge. The news follows the launch at Alderley Park, in September, of a £30m Greater Manchester and Cheshire Life Sciences Fund, expansion of AZ’s Hurdsfield operation and Cheshire East Council investment of £1m in Jodrell Bank to help unlock more than £100m of investment funding for the world-leading radio telescope to lead the international Square Kilometre Array project.

Last July the Government said the best of the UK’s businesses, scientists, clinicians and engineers would work side-by-side in the new ‘catapult in medicines technologies.’

The programme will further boost the economic recovery of Alderley Park and play a key role in the bioscience element in the vision for the Northern Powerhouse.

Cheshire East Council has a 10 per cent stake in the Manchester Science Partnership, which aims to build on Alderley Park’s international reputation as a centre of excellence in the world of bioscience and life science research and development.

The Chancellor also announced yesterday a £400m Northern Powerhouse investment fund will be created to help small businesses to grow – with £5m going to Manchester Museum and £150m to help make oyster-style ticketing a reality across the North.