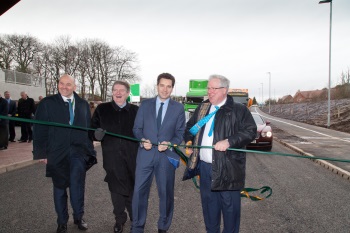 The final stretch of road, which completes the eastern bypass around Crewe, was opened just before Christmas by the Secretary of State for Transport, Patrick McLoughlin MP.

Crewe Green Link Road has taken 15 months to build and involved a full weekend closure of the Derby to Crewe railway line, so that a 2,000 tonne bridge could be installed to carry the line.

This was a 54-hour operation that required precise accuracy and the deployment of two computer-controlled modular transporters each with 128 wheels on either side, and creeping at less than one mile per hour, to move the 30 metre-long structure into position.

Principal contractor Morgan Sindall worked against the clock to install the bridge last Easter, ensuring that the job was completed in time for the line to be re-opened by Network Rail after the Bank Holiday.

At 1.1km long the dual carriageway road, costing £26.5m to build, forms a valuable link between the A500 Hough-Shavington bypass and the A5020 Weston Road.

It unlocks nearly 100 hectares of potential development land for housing and businesses as well as alleviating huge congestion problems to the east of the town.

Cheshire East Council Leader Michael Jones, said: “The completion of Crewe Green Link Road is yet another fantastic achievement for this Council and demonstrates our total commitment to the regeneration and future growth strategy for the town.

“I have always stated how committed I am to providing infrastructure that alleviates the frustrations experienced by businesses and residents when travelling, and I am so pleased that Cheshire East Council has delivered yet another strategic highways project that will help to stimulate connectivity and attract new businesses and jobs to this great railway town.”

Part of the cost of Crewe Green Link Road  is met from a £15.6m grant from the  DfT , the rest is met by Cheshire East Council and local developers.

The whole scheme includes extensive environmental impact measures for wildlife and the planting of hundreds of trees.

Councillor David Brown, Deputy Leader of Cheshire East Council and Cabinet member for highways, said: “The completion of this highway scheme represents a further landmark in the regeneration of this great town of Crewe.

“This is the second major road project we have completed in Crewe this year in addition to the highway improvement projects at junctions 16 and 17 on the M6.

“The A500 is the main artery road feeding Crewe from the M6 and the works we have completed so far will have a significant impact on the flow of traffic, the economic growth of Crewe and our ambitions as a Council to make Crewe a great place to live, work and do business.”

Paul Colman, Chief Executive of South Cheshire Chamber of Commerce and Industry said: “This new road will further alleviate some of the pressure we experience on the town of Crewe

“Crewe is already an extremely attractive location for business and removing some of the congestion headaches faced by companies, their drivers and employees will be a huge boost to the town’s growth and economy.”

Crewe Green Link Road is to be named David Whitby Way in recognition of the bravery of a local train driver, who became caught up in the 1963 Great Train Robbery.