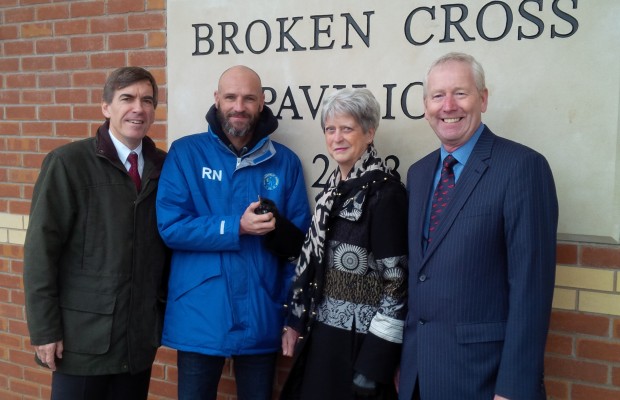 2015 finished on a high note at Jasmine Park in Macclesfield, the pavilion was declared formally open at long last. The keys to the building handed over by Cllr Liz Durham, Mayor of Macclesfield to Richard Nelson, Chairman of Macclesfield Junior Football Club on 30th December, at a ceremony also attended by local MP, David Rutley.

The new building boasts superb facilities, including a community room, kitchen and changing rooms, and is now available for use by local residents and community groups. Anyone wanting to book a room should refer to Facebook and search for Jasmine Park Community and Sports Centre. Jasmine Park Pavilion Community Interest Company (CIC) is responsible for the building and the open spaces.

The first football match is due to take place on Sunday 10th January, between Macclesfield Boys JFC vs Winsford Diamonds.

Handing the key to the community is an important milestone. There has been a strong campaign led by Cllr Chris Andrew and supported by an active community group, to open the play area and the Pavilion following a protracted handover between Taylor Wimpey, the developers, and Cheshire East Council.

At the opening, David said, “It was great to see the keys finally handed to the community. I am pleased to have been able to actively support the campaign to get access to the Pavillion at Jasmine Park. It has taken a long time to get to this point, but I am delighted that the wider community and Macclesfield Junior Football Club will now be able to have full use of these excellent facilities.”

Share this...
Related Items
← Previous Story What’s on at Cinemac
Next Story → Whitehead heading for Wigan