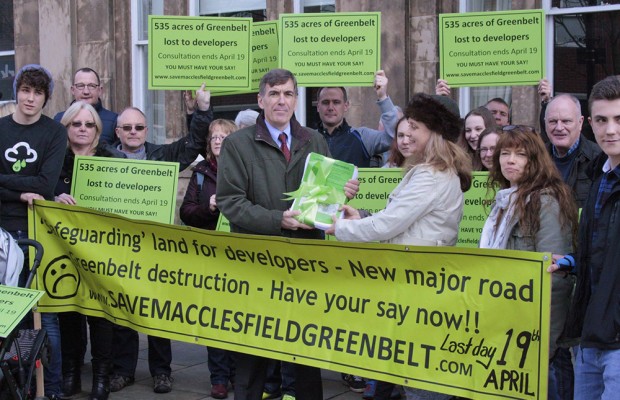 Member of Parliament for Macclesfield, David Rutley, met with local campaign group, Save Macclesfield Greenbelt, to voice his concerns about current proposals for the Cheshire East Local Plan, which would lead to significant development on the Green Belt.

The group held met outside Macclesfield Town Hall, to demonstrate the strength of feeling which exists among local residents about the impact of the current proposals on Green Belt land. David was presented with a bundle of submissions for the consultation bound in the campaign group’s distinctive green ribbon.

The Save Macclesfield Greenbelt group, originally set up in 2012, has been encouraging local residents to contribute to the public consultation being held by Cheshire East Council about the Local Plan, which will remain open until 5.00 p.m. on 19th April.

David has previously outlined his concerns relating to the proposed scale of development on sites in the Green Belt in Macclesfield and Poynton during the Local Plan time horizon up to 2030. He has stated that more focus should have been put on development on brownfield sites, given the time and resources that have been dedicated to shaping the Plan, and has also expressed his concerns about the scale of the proposed “safeguarded” land on the Green Belt, that could be developed after 2030.

Speaking following the meeting, David said, “I was pleased to meet with so many local residents and have the opportunity to once again express my concerns about the impact of the Local Plan on Green Belt land. I would strongly urge local residents to register their views on the Cheshire East Council’s Local Plan page online or fill out a comment form before the submission deadline on 19th April.”