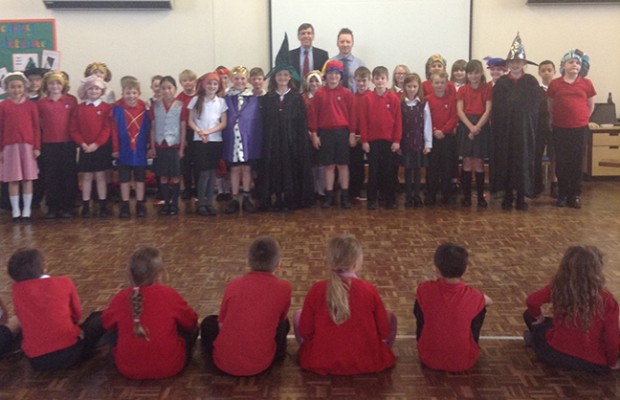 The 400th anniversary of William Shakespeare’s death was marked at Upton Priory School with a performance of “Mini Macbeth” by Year 4 pupils, and a visit by local Member of Parliament, David Rutley, who met with pupils ahead of the final performance.

The School chose to mark the celebrations with the performance, in order to help pupils further realise their potential in a range of different activities and to build confidence, while at the same time developing an understanding of the nation’s greatest playwright.

David attended the dress rehearsal, with children preparing all day for the afternoon’s performance to parents, teachers and other school pupils. David also addressed the whole school at the start of the production, at which he spoke about how the bard continues to have an impact on our culture and enables many people to gain a greater appreciation of dramatic arts.

Following the dress rehearsal, David said, “It was a pleasure to be able to support the 400th anniversary celebrations of William Shakespeare, and to see so many children gaining a greater appreciation for his work, while developing new skills. For some of the children, this may have been their first taste of Shakespeare, so it was great to see everyone putting in so much effort ahead of a really impressive performance. I would like to congratulate everyone who got involved.”