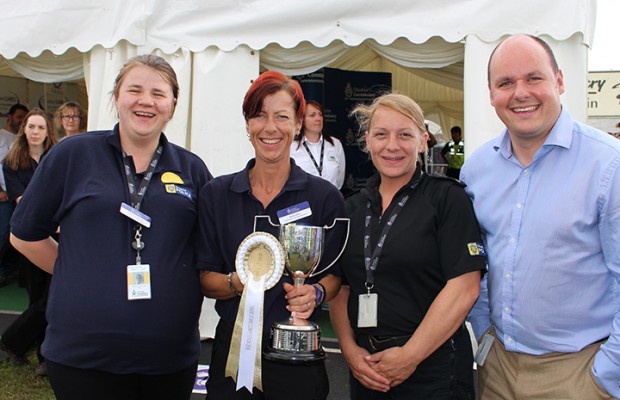 Cheshire police proved to be top of the cops as they were awarded first prize for ‘Best Trade Stand’ at the Royal Cheshire Show.

Thousands of visitors poured into the Cheshire Constabulary marquee and exhibition stand on Tuesday and Wednesday (June 21-22) at the Tabley Showground.

The exhibition team took a slightly different approach this year, placing extra focus on a rural and wildlife crime theme to make their stand even more topical and engaging for their audience.

There were a number of eye-catching displays and attractions, including a fully liveried police tractor with a blind spot awareness feature, a rural roads safety track, and a special driving simulator that demonstrated how distractions from mobile phones can impair your driving.

There was also an interactive rural crime detective scenario for youngsters to solve the crime of the stolen peregrine falcon eggs. Their detective skills were put to the test as they worked their way through by calling 101, making a media appeal, gathering evidence identifying a suspect.

There were also recruitment opportunities, crime prevention advice – including property marking and agricultural machinery marking – and a chance to sign up to the Constabulary’s Neighbourhood Alert messaging system and Watch schemes.

And the team were rewarded for their efforts when show judges deemed it the Best Trade Stand at this year’s show.

Engagement and Insight manager Anna Collins said: “We’re delighted to have been awarded first prize for best Trade Stand. The Cheshire Show provides us with the perfect opportunity to spread our messages far and wide, but in a way that is engaging, relevant and fun.

“Everyone involved with our stand thoroughly enjoyed themselves, especially talking to and helping the young people who really engaged with the messages we were trying to get across.”

The Cheshire Show also offered Police & Crime Commissioner David Keane the opportunity to engage with members of the public, as he gathers as many views as possible during his six-week ‘Join the Conversation’ tour.

Mr Keane will collate the many views from the show and at other summer events into his Police & Crime Plan, the first draft of which is anticipated to be published at the end of the year.

He said: “This was my first visit to the Cheshire Show as Police & Crime Commissioner and I have to say I was really impressed with the Constabulary’s exhibition – I congratulate them for winning the Best Trade Stand title.

“It was a great opportunity for me to speak to so many of you. My main priority is to be the public’s voice in policing, and to represent the views and wishes of our diverse communities as much as possible so that Cheshire’s new Police & Crime Plan truly reflects your needs.”