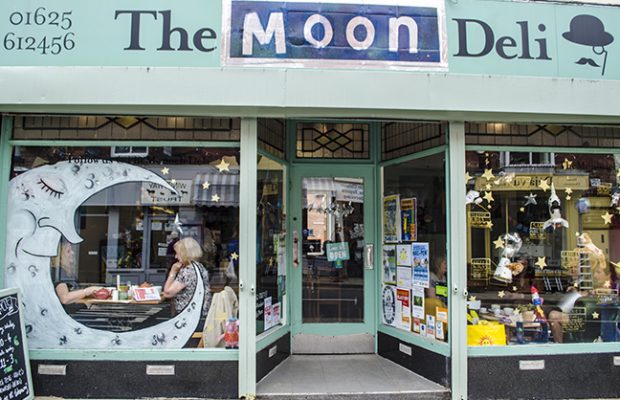 There was a close finish to the first People’s Choice of Barnaby Shop Windows as almost 300 votes were cast during the festival for 40 town centre premises decorated on the theme ‘Space’.  Four shops jostled for the top slot over the last few days but the winner was announced as The Monocle Deli, Chestergate which nudged ahead with 42 votes.

The Helpful Hand on Chester Road was runner up with 39, Shopmobility on Churchill Way had 38 and Macclesfield Eye Society on Queen Victoria Street received 31 votes.

It’s a double success for The Monocle Deli, Chestergate, which was chosen by Barnaby judges earlier in the month as winner of Out Of This World Prize for creativity and innovation. The whole shop front was transformed with a quirky, engaging display about animals in space alongside funny, skillfully made, mechanical toys.  Customers in one window of this popular art gallery, cafe and occasional bar found themselves sitting inside a crescent moon. The name of the cafe was also temporarily changed to The Moon Deli.

The Helpful Hand chose the Clangers, the popular early 70s TV animation where knitted animals live in and on a moon-like planet. This window had been highly commended by Barnaby judges.  Shopmobility windows sported a handmade alien invasion!

Shop Window competition organiser and Barnaby volunteer, Hannah Young congratulated all those taking part: “There were so many inventive windows and the top four seem to have captured the imagination of their customers and the public. But special  congratulations to The Monocle Deli who have really entered into the spirit of the competition and of the Barnaby Festival.  It’s the first time we’ve run a People’s Choice prize – sponsored by Macclesfield Town Council – and we’re really pleased with the number who entered the competition and who voted. It’s made the town even more fun to explore over Barnaby”.

The Monocle Deli will receive £150 plus a £50 voucher to use at the Arighi Bianchi Cafe.

Share this...
Related Items
← Previous Story Be careful out there
Next Story → Barnaby Festival success