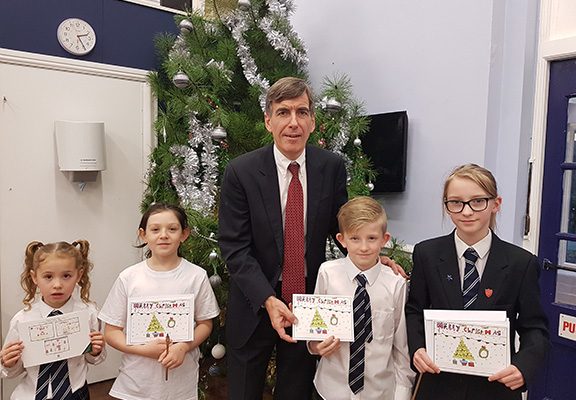 There was added festive cheer at Ashgrove Academy in Macclesfield, when local MP, David Rutley, announced the winner of this year’s annual Parliamentary Christmas Card competition.

The winner was eight year old Rhys Woodcock, whose colourful picture of a Christmas tree and festive decorations put him ahead of other entrants. David also recognised the contributions of three runners up: Georgia Parkinson, aged 11; Freya Monk, aged seven; and Winona Wilde, aged 6.

In addition to meeting and giving prizes to the winner and runners up, David also took the opportunity to meet with the Academy’s Principal, Heather Jackson, to catch up on the continued progress being made at the School, and to find out about priorities for the year ahead.

The competition is into its seventh year, beginning when David became MP for Macclesfield in 2010. The winning entry is featured on his Christmas card, which is sent out to hundreds of Parliamentary colleagues, Government ministers, civic leaders and community organisations in the constituency.

Speaking at a special assembly on 9th December, David said, “I was hugely impressed by both the very high standard of entries, but also by the level of participation by pupils at Ashgrove Academy. Plenty of energy and enthusiasm was put into the competition, resulting in a very difficult choice when selecting a winner. It has been great to come to the School again and present Rhys with his well earned prize, as well as meeting the talented runners up. I would like to thank all the pupils who took part, as well as the supporting teachers and parents, for all their efforts.”

Share this...
Related Items
← Previous Story Christmas clampdown on drink and drug drivers
Next Story → Give car thieves the boot this Christmas