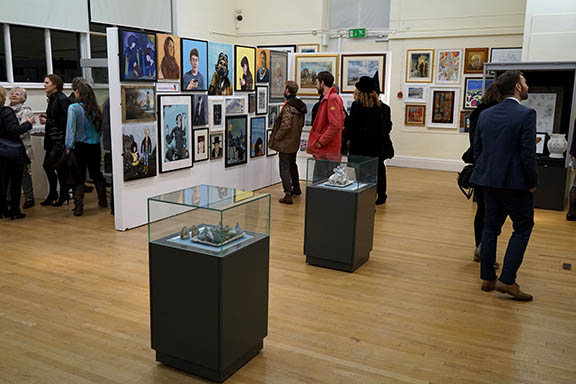 The winners of four of the prize categories for the 4th Macclesfield Open Art Exhibition have been announced; the public are invited to vote for the winner of the Visitors’ Choice Award.

Macclesfield is a town steeped in heritage and culture, filled with creative people. Maxonian artist Helen Marten has won both the Hepworth Prize and Turner Prize this year for her sculptures, and now artists in Macclesfield have been given the opportunity to follow in her footsteps. The Macclesfield Open Art Exhibition at The Silk Museum provides a platform for artists to exhibit their work in a gallery setting and gain exposure, as well as the chance to win awards in recognition of their talent.

Now in its 4th year, the Macclesfield Open Art Exhibition is comprised of works from artists around the area. 225 works have been selected for the exhibition from 323 submissions from artists in Cheshire, Staffordshire, Derbyshire, Nottinghamshire, and a few from even further afield. Approximately two thirds of the artists included in the exhibition are from the Macclesfield area.

The organiser of the exhibition, Geoff Archer, is thrilled with the response to the call out for submissions and the quality of the entries. “Around half were from artists who have not exhibited in the Macc Open before and quite a few were artists who have not exhibited anywhere until now. That said, the standard is extremely high and this year’s exhibition is arguably the best yet.”

Hundreds of artists and guests attended a preview of the exhibition at The Silk Museum on Friday 9 December, and the winners of the panel-selected awards were announced by Sue Hughes, Director of Macclesfield Museums. Jean Byatt and her oil painting ‘A Shady Lane’

The Macclesfield Open Award of £300 went to Jean Byatt for her oil landscape ‘A Shady Lane’. Two Highly Commended Awards of £100 each went to Angela Herd Hall for her acrylic study ‘Red Onions’ and Carolyn Simpson for her soapstone sculpture ‘Flight’. Peter Davis and Haha ur weird

The Mail Boxes Etc. Award of £100 went to Peter Davis for his acrylic portrait ‘Haha ur weird’, chosen by the sponsor.

The Visitors’ Choice Award of £100, donated by Macclesfield Town Council, is voted for by the public and will be announced at the end of the exhibition. The majority of works are for sale, so visitors have the chance to buy their favourite piece as well as vote for it.

The exhibition is free to visit, and ends on 21 January 2017. The Silk Museum is open Monday to Saturday, 10am to 3pm. Check the website, silkmacclesfield.org.uk for any changes to opening times over the festive period.