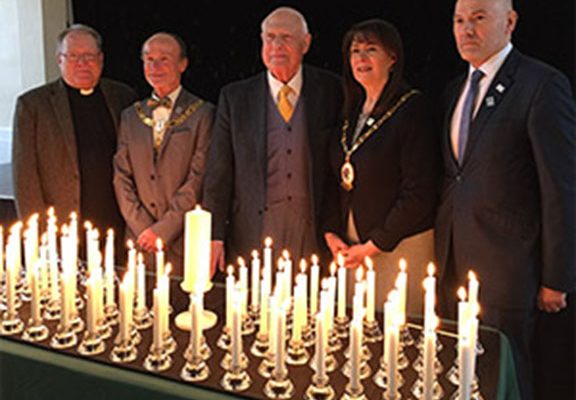 The ceremony included readings of testaments from survivors of genocide, a musical performance by pupils of Sandbach School, the lighting of memorial candles and the observing of two minutes’ silence.

Holocaust survivor Peter Kurer gave a powerful and poignant talk about the role the Quaker movement played in helping him and many other Jewish people flee the Nazis’ brutal oppression and escape to Britain before the outbreak of the Second World War.

Cornet player William Dakin, a year 13 pupil from Sandbach School, was accompanied by John Barber on piano for a performance of ‘On With The Motley’, by Leoncavallo. Additional music was performed on trumpet by Sandbach School year nine pupil Tom Palethorpe.

Mike Suarez said: “So much of our ability to remember the Holocaust and subsequent genocides is due to those that survived and spoke out. They have done this through their testimony, through poetry, other literature and art.

“We should listen, read and understand what they went through. This is particularly important as there are very few people left who survived the Nazi Holocaust. It is important that we remember – which is why we hold events such as this.

“Today’s ceremony was a solemn occasion where the people of Cheshire East joined together symbolically, as a community, Candles lit to mark Holocaust Memorial Day, at Sandbach Town Hall
to bear witness, remember and say ‘never again’.

“Sadly, humanity is still scarred by the mistaken belief that race, religion, disability or sexuality makes some people’s lives worth less than others.

“We must never forget these genocidal crimes, or their innocent victims, and we must challenge ourselves to learn the lessons of the past to help create a better future that is more compassionate and more humane.”

Holocaust Memorial Day has taken place on the same date since it was introduced in 2001. January 27 was chosen as that was the date when the Nazis’ notorious Auschwitz concentration camp was liberated by Soviet troops in 1945.

The Holocaust resulted in the annihilation of an estimated six million Jews, two million Gypsies, 15,000 homosexual people and millions of others by the Nazi regime and its collaborators.

Sadly, since 1945 there have been other attempted genocides across the world – including Rwanda, Cambodia and Bosnia – and these are also commemorated on Holocaust Memorial Day.

This is the fourth year the council has held an annual Holocaust Memorial Day commemoration, which it first held in 2014.