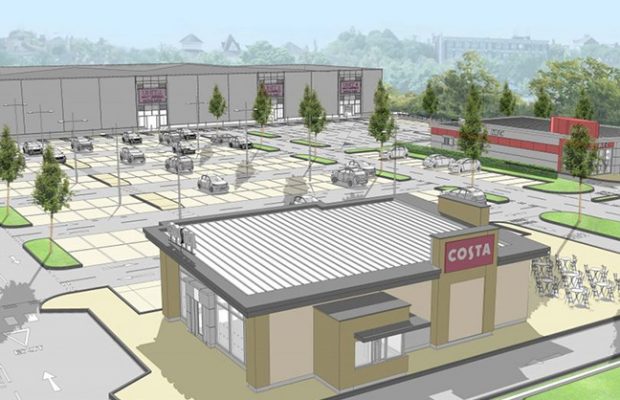 Following a public enquiry, plans to redevelop the former Barracks Printing mill have been approved.

Cedar Invest had challenged Cheshire East Council’s decision to refuse the application but Planning inspector Matthew Birkinshaw, said he allowed the appeal but with conditions to protect the ‘vitality and viability of Macclesfield Town Centre’ including limiting the total amount of retail floorspace and restrict the type and amount of goods that could be sold from the site.

A 2016 assessment found that the health of Macclesfield Town Centre was variable with high vacancy levels of units within the town centre during 2015. Updated evidence shows this has increased to around 15% of units currently empty.  Total comparison floorspace and market share are also in decline. In 2014/15 Macclesfield was ranked 225 in the sub-regional shopping hierarchy, down from 170 in 2005.

(Ed: The study also found that the centre had at that time fit for purpose car parks – but of course that was before Churchill Way car park had been earmarked for redevelopment.)

A report from planning officers said the proposal would bring ‘economic benefits through new jobs, investment in the area and by bringing a vacant brownfield site into viable use on one of the key gateways to Macclesfield’.

The site has been unused since 2004 when fire ravaged the buildings. There were further fires in 2013.

Regarding traffic the inspectors report states: “The main access to and from the site for customers (and smaller vehicles servicing the ancillary’pods’) would be from a new left-in/left-out junction onto The Silk Road.  Although The Silk Road was designed as a distributor road, no objections to the access have been raised by the Council’s Head of Strategic Infrastructure.  Additional lanes for drivers to deacceierate and merge back into oncoming traffic would be provided and no capacity issues have been identified.  There is no robust evidence before me which illustrates that the access arrangements would be unsafe or lead to hazardous congestion.”

With regard to the nature of units the report states: “In the interests of the vitality and viability of Macclesfield Town Centre conditions are needed to limit the total amount of retail floorspace permitted, the amount of retail floorspace provided at ground floor level, the total external sales area for use as a garden centre and the total Class A3/A5 floorspace.  A minimum unit size is also necessary to ensure that the scheme does not create smaller shops with similar occupiers to the town centre.”