Home / Community / Can we help Marius?

Can we help Marius? 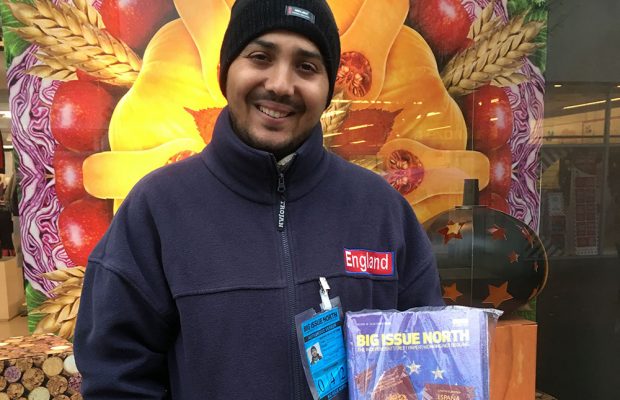 If you shop in Macclesfield you may have seen a young man standing outside Marks & Spencer on Mill Street, selling The Big Issue.

Marius Tanase came over to England as a young child, with his father, mother and younger brother to escape persecution for their Christian beliefs – in 1998.

His parents efforts to stay in Britain were rejected – but being very young – and in a desperate plight – Marius and his little brother were allowed to stay.

With the help of friends and neighbours they rose to meet the many challenges life threw at them.

Marius is now married, with children of his own.

Talk to Marius about his family and his eyes light up – though tinged with sadness at not being able to give them many of the things that most of us take for granted.

Despite having to live life on the very edge, watching every single penny, Marius is never pushy, or aggressive in his efforts to sell his magazines – the only way he’s found that enables him to keep a roof over this family’s head and food on their table.

His children have been encouraged to be diligent in their schoolwork and to strive to contribute to this land that is their home.

He tells me they are old beyond their years, uninterested in material things, just wanting to see their dad well and happy.

A smile and a courteous thank you, when someone bought his magazine – or just wished him well, has brought Marius many friends in Macclesfield.

Rather than avoid the Mill Street area (as I had to do with a previous Big Issue seller) – I make a bee-line for M&S every Friday and Saturday to check on Marius, buy a magazine and learn how he and his family are managing.

Unfortunately Marius became ill several months ago – and with his illness came chronic back and stomach pain.

These days he struggles with the constant pain – not helped by having to stand in one spot for several hours. The painkillers make it difficult for him to work – so he avoids taking them.

The several weeks he spent in hospital saw him out of danger – but meant he wasn’t earning.

His wife took over – leaving two of their youngest children with kind friends and neighbours – in an effort to keep some money coming in.

Despite all her efforts Marius’s illness resulted in the family falling way behind with their rent.

When he finally came out of hospital Marius had to literally go down on his knees begging his landlord not to evict his family. Fortunately, the landlord agreed – as long as Marius agreed to repay the unpaid rent.

He’s since returned to his usual spot outside Marks & Spencer, but now Marius not only struggles with pain and paying rent – but also finding the back-rent he owes.

I’ve set up a Just Giving page https://www.justgiving.com/crowdfunding/mariustenase  in the hope that there may be others who feel like I do – people who may want to help Marius, not only clear his back-rent, but try to ensure he and his family, for at least once in their lives, have a Christmas to remember.

Any amount will help – even £1 will make a big difference – and contributions can be left anonymously.