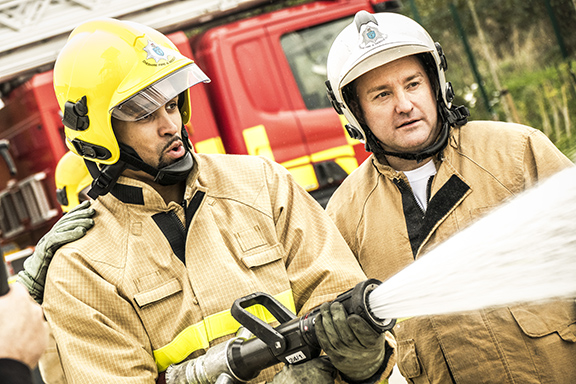 Cheshire Fire Choir has been in fine voice over the last few months, singing and representing Cheshire Fire and Rescue Service (CFRS) at a number of high profile events and their year is set to culminate in a network television appearance.

The choir will be singing with Leona Lewis in a one-off Christmas special – ‘A Night for the Emergency Services’–  featuring talented members of all the emergency services performing alongside special celebrity guests including Michael Ball, Alfie Boe and, of course, Leona Lewis.

Also featuring in the programme will be the show’s host, Ashley Banjo from dance group Diversity, who spent a day at Lymm Fire Station filming with White Watch. ‘A Night for the Emergency Services’ aims to celebrate the incredible work of the emergency services and thank them for all their efforts. Choir Chair Tom Daniels said: “It has been a fantastic year for us with great opportunities for us to support the work of the emergency services. Probably the most poignant performance for us all was when we sang our signature tune The Rising at the 10th Anniversary Memorial Service in Warwickshire for the Atherstone on Stour fire,  in which four firefighters lost their lives tackling a warehouse blaze. Warwickshire Station Commander Neil McElvenny wrote afterwards: “Many different things made the service what it was, and again just one of these was the presence of the Cheshire Fire Choir whose performances were stunning and moving in equal measure.”

The Fire Fighters Charity (FFC) was the chosen beneficiary of the Enterprise Vision Awards (EVAs), which recognise women in business from across the north west. The choir was a natural choice to be invited to perform at the ceremony at the Winter Gardens Blackpool where, coincidentally, Cheshire colleague, Widnes firefighter Patrick McBride, was in the audience in his guise as the Cadbury Milk Tray Man! A little closer to home, they have performed in the beautiful setting of Eaton Hall for the Lord Mayor of Chester’s charity dinner and have taken part in the Macclesfield Christmas Lights switch on.

The television performance with Leona Lewis can be seen on ITV1 on Wednesday 20 December at 9pm.

Share this...
Related Items
← Previous Story Will coach trips be the only option for visitors?
Next Story → New UX manager for Sigma