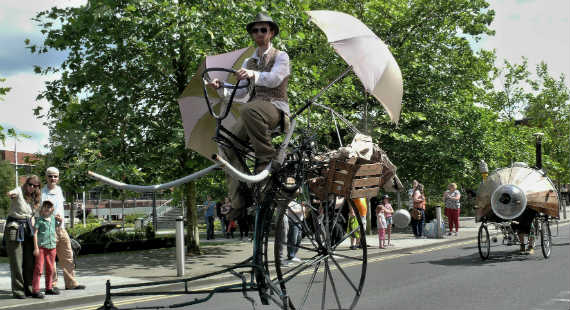 Sandbach Transport Festival and ‘TrAction’ Crewe will both benefit from a significant financial investment over the next three years, following successful 2017 pilot events to introduce more families to the arts.

Cheshire East Council, in conjunction with Crewe Town Council, Sandbach Transport Festival and Fleetwood Festival of Transport, has secured a £528,467 Arts Council grant to help stimulate enthusiasm for the arts through SpareParts:Accelerate, a three-year engagement programme targeting communities where the arts is considered to be under-represented. SpareParts:Accelerate will be a prominent feature of the two colourful carnivals in Sandbach and Traction in Crewe setting out to involve people who would not normally consider the arts as something for them.

This year, the two events will be even bigger and better and will include a wider programme of school and family workshops together with additional features aimed at raising the profile of both towns.

Themed around transport through the ages, SpareParts:Accelerate will feature the customary parade of imaginative and wacky creations, adding humour and entertainment to both carnivals which, by tradition, celebrate the rich heritage of the borough’s transport connections.

The Arts Council grant will help Cheshire East Council and the Fleetwood Festival to deliver a number of arts-based workshops in schools and communities, introducing adults and young people to new creative skills and encouraging future participation.

A principle objective of the whole project is to deliver economic benefits for both towns and contribute to the skills development of adults, young people and children through the arts.

Festival director of SpareParts:Accelerate Adam McGuigan said: “The support of Arts Council England is invaluable to us. We can be more ambitious with the programme and participation opportunities. We have some incredible artists for 2018 and we look forward to announcing more detail in the near future.”

Organisers hope the input of SpareParts:Accelerate will attract more spectators, particularly from further afield, driving forward the local economy while introducing visitors to a variety of creative opportunities.

Councillor Don Stockton, Cheshire East cabinet member for cultural economy, said: “These are truly fantastic, creative events not just celebrating the borough’s links with transport, but also raising the profile of the arts as a form of education and entertainment.

“The funding is particularly exciting as it will allow for additional activities in the run up to the festivals so that each community can be more involved, creating performances and mobile artworks that will sit alongside the professional street performers.

“It will also enable the appointment of a participation manager who will work with schools and community groups to build engagement and sustain the festivals in future years.

“I would like to thank all our partners who have worked hard to secure this grant and I can announce that Cheshire East Council is also investing £30,000 over three years to support this entire arts programme.”

Elsie Alcock, from Sandbach Transport Festival, now in its 28th year said: “Sandbach is a transport town.  Its recent history is embedded in the road haulage industry with Foden and ERF once big employers in Sandbach.  This is excellent news and we would like to thank all those involved in helping to secure this funding.”

Crewe Town Council leader Simon Yates said: “We are thrilled. The funding will enable us to add more fun and excitement to Crewe’s ‘TrAction’ event and to work with schools and community groups to get added local involvement, especially in the parade, which should become a major feature of the day.”