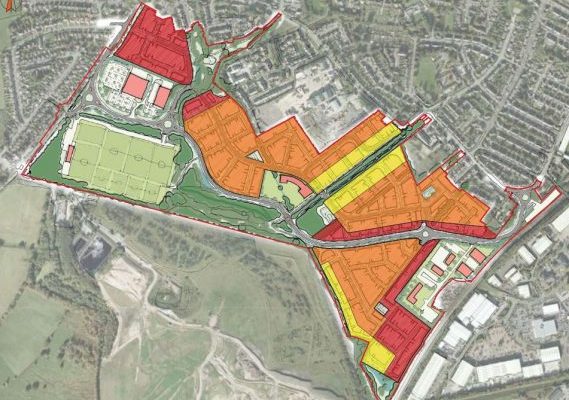 Cheshire East is set to start the land assembly process to build a £20m link road south of Macclesfield, which could help unlock the construction of more than 1,000 homes, a school, and a supermarket.

Next week the council’s cabinet will be asked to endorse the potential use of compulsory purchase powers to assemble the land needed, and will also be asked to sign off procurement for a contractor to build the road, which will run between Congleton Road and London Road.

Cheshire East received a £10m award from the Housing Infrastructure Fund to bring forward the site south of the town, which covers around 118 acres.

Proposals outlined for the area so far include more than 1,000 homes; six acres of commercial space towards the eastern end of the site; a primary school, a six-acre sports field, and six acres of retail space at the site’s western gateway.

The homes will be delivered on four separate parcels of land, totalling 61 acres; the largest of these is 21 acres and borders the site’s commercial element.

The council has already undertaken soft market testing to gauge interest for the site, and said there had been “interested for retirement homes, extra care, and nursing homes”.

Cheshire East has already made a resolution to grant outline planning approval for the new homes, the link road, a primary school, retail, and employment at the site, which it confirmed in August last year.

Most of the land needed for the link road is owned by either the council or TG Ltd, a Jersey-based company, which was confirmed as Cheshire East’s partner for the development of the land in 2016.

TG owns much of the eastern portion of the site, while the council’s land ownership is focussed towards the western end of the site, the majority of which is earmarked for housing alongside retail development.

Part of the land needed for the road is in “unknown and unregistered” ownership, meaning compulsory purchase powers may be necessary before construction of the road begins.

Procurement of a contractor will begin in June this year and a delivery partner will be confirmed in January 2019. Work is expected to start on site in February next year and is likely to complete in August 2020. It will be funded by the £10m HIF grant alongside £10m of the council’s money.

The masterplan for the site, the majority of which has been earmarked for housing under Cheshire East’s local plan, has been prepared by ID Planning consultants.