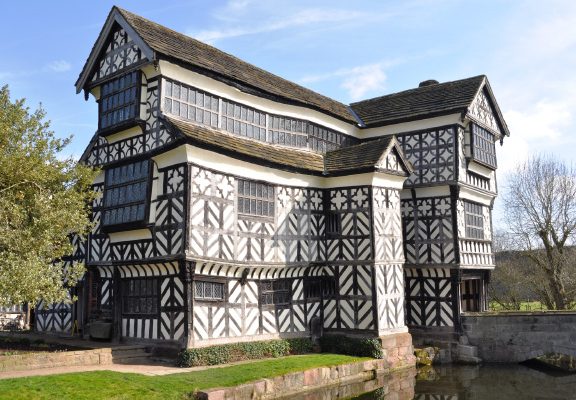 Reflections of a Victorian tragedy have been discovered in the windows of Cheshire’s best-known Tudor home.

An unusual inscription on one of the windows in the famous long gallery at Little Moreton Hall has been identified as a very personal memorial to a Congleton girl who died in a road accident in 1892. The discovery came after Jennifer Edwards, a National Trust volunteer room guide at the hall, took a close look at one of the 12,500 tiny panes of glass in the gallery.

The pane, known as a ‘quarry’, is located high on the gallery’s end-window. Scratched into it, virtually unnoticed over the years, are the words ‘Mary Martha Gee was kild Nov 22 1892’.

Jennifer said, “I had difficulty making out the fourth word. So I took a photograph to study it more closely and realised it must translate as ‘was killed’. I also thought there may be a connection to an inscription on another quarry on the side windows of the gallery, several metres away from this one. ”

There, several workmen who were involved in extensive repairs and restoration to the gallery in 1893 scratched autographs into the glass. One was ‘William Gee’.

Jennifer searched various census returns and found that Mary Martha Gee was a girl who lived in Congleton until her death in November 1892 at the age of eight. She established that William Gee was the girl’s grandfather.

He was a master plumber and had obviously been contracted to carry out specialist work on the lead which holds the glass together in the gallery windows. Jennifer then obtained a copy of Mary’s death certificate from the local Register Office. It revealed that she had died in a collision with a baker’s van.

Little Moreton Hall’s historian, Jill Owen, discovered an account of the inquest in an edition of the ‘Congleton and Macclesfield Mercury and Cheshire General Advertiser’ published on 26 November 1892. The paper, the fore-runner of the Congleton Chronicle, reported that May Hankinson, a friend of Mary, gave evidence that they were playing in Spragg Street, Congleton. Mary ran across the road with another girl just as a horse-drawn baker’s van came along the street. They were both knocked down. The other girl was unhurt, but Mary died instantly. The inquest jury returned a verdict of ‘death due to accidental causes’.

Jennifer said, “It’s obvious that William Gee was still grieving for Mary when he was working at Little Moreton Hall a few months later. He inscribed the quarry as a lasting memorial to his little granddaughter. I hope he would be pleased that we have discovered the tragic story behind the inscription and that her name still lives on at Little Moreton Hall.”