“We love Geronimo! Can we go again next year?” 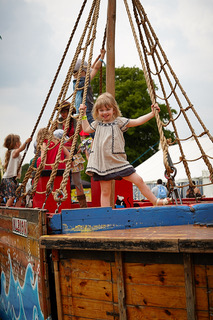 Geronimo – A mini Glastonbury for the kids and the ‘must do’ family festival!

On Saturday 26th May, for the second year running, we packed up the car with ourselves, the kids (Emily aged 4 and Nile nearly 3), a hefty picnic and the sun cream and excitedly headed to Arley Hall & Gardens, near Knutsford.

We arrived just after 10 am, parked and unloaded and breezed into the festival ground with ease… definite proof that this is a smooth, well organised operation – and a must for a family festival, specifically aimed at those with young children – anyone with small children knows that nightmare parking and long queues are not a good start to any day out.

We grabbed a copy of the informative brochure, containing a what’s on guide, including times and locations of the immense variety of shows, spectacles and acts across the festival ground and went into a mild state of panic, as we realised that the ‘Starkidz Superhero vs Princess show’ was starting in the next 5 minutes – somewhere on the far side of the site… Was this avoidable? Yes. Probably the one and only disappointment for us as parents was that there wasn’t a timetable for the shows and a site map on the Geronimo website this year – meaning we couldn’t plan which shows we wanted to see, in advance. However, in hindsight, this mild disappointment on arrival actually made the day even more enjoyable in the end.

Taking stock, we decided against dragging the kids at lightening speed across the site and instead, headed straight for the donkey rides – always a big hit with our two and an even bigger hit with us, as it is one of the immense number of activities that are included in the ticket price and so free of charge on the day! We then headed to the Circus Zone, for Cirque De Hilarious, where ‘The Superstars of Slapstick’ – Clive Webb and Danny Adams made all the grownups laugh out loud with their humour and had my youngest, Nile, beside himself giggling at their absolute silliness and energy. The dancers and lady who performed with the hula-hoops and performed an amazing display of ribbon acrobats entranced my daughter, Emily. En route to the Castle stage to set up our picnic, the kids were captivated by the array of sights and sounds around them – the beauty really is in the detail with this festival – every where you turn there is something to catch your eye – trees festooned with lampshades – somewhere to take 5 minutes relaxing with the kids – little areas filled with brightly coloured hammocks or some settees to chill out on – some sort of entertainer to stop you in your tracks – be it lady’s dressed as elegant butterflies, storm troopers, the Bear Necessities Bear, a Tyrannosaurus Rex, a bubble maker, a balloon artist.

At the Castle stage we were thrilled to see Elsa and Anna belting out our favourite tunes from Frozen (disaster on missing the Starkidz show averted!), so we were serenaded through our picnic, as we eagerly awaited the arrival of Justin Fletcher on stage…The infectiously goofy and lovable CBeebies star certainly didn’t disappoint and had all the parents and kids singing along to classics such as ‘Lets Go Fly a Kite’ and ‘Heads, Shoulders, Knees and Toes’. Next on to the Victorian Style Fun Fair – which provided everything our little ones could have hoped for ride wise and amazed us at it’s unbelievable value for money… Campers and those who purchased Tier One tickets, on their release back in January, were treated to a limited number of Fairground rides (5 per ticket holder), but other ticket holders have to purchase fairground tickets before riding. We did this with bated breath, as we wondered if we’d need to take out a small loan to cover the costs – not so – for £1 per ride, you really couldn’t mutter a single complaint – absolute bargain! Sadly, for me, I got the short straw and had to face my fear of heights and brave the Helter Skelter twice – once with each child (I damn Peppa Pig and the ‘Fairground episode’ – as I think this is the only reason both of my beloved children were so bloody excited about going on it). Daddy definitely got the easy option with the breathtakingly beautiful and timeless carousel ride. It was on slow route to the main arena to watch the spectacular ‘Horsemen of the Knight’, that I realised that the lack of timetable on the Geronimo website, for forward planning of which shows we would go to, was actually a blessing in disguise, because it meant that (unlike last year, to a certain extent), we weren’t trying to rush the children from one area to another for a certain time and this allowed us to find and enjoy some real gems, which the children absolutely loved!

We discovered a wooden pirate ship, with real life pirates (which to be honest, Emily and Nile would have played on all day, with joyous abandon, given the chance). We met Aldabra Giant Tortoises and the ‘Creatures Ark’; which had a kookaburra, tarantula, a tawny frogmouth owl, and meerkats (to name but a few) on display. ‘The Rig’; a musical playground, built from up-cycled and recycled objects to create an array of musical instruments and sound experiences.

‘Cardboard City’; where we spent some real down to earth quality time creating (half decent) pirate swords with Emily and Nile, out of just cardboard and parcel tape, with electrical tape, feathers and sparkly paper for decoration.

‘Nomad’s Bazaar’ – a wonderfully quirky retail tent selling an array of beautiful gifts, toys and accessories (at very reasonable prices) and where Nile’s dreams came true and he acquired a rather more superior (and sturdier) pirates sword, beautifully carved from wood and rope, and Emily managed to secure a beautiful flower crown and unicorn figurine.

The ‘Spoon Meadow’, where Emily reminded me of the joy there is in the simple things, while she lovingly painting a wooden spoon, which she then planted to dry in the spoon meadow, ready for collection later.

The ‘Rocking Horse Tent’, which was just that – a gazebo style tent filled with every shape and size of rocking horses – complete with riding hats! Another place Emily and Nile would have happily passed away the hours! Sadly, we realised at this point, that the day for us must come to an end, and we headed back to the entrance/exit, with just one last stop off at the Hasbro area – where Emily had the chance to get some free My Little Pony goodies, as well as a Cutie mark painted onto her arm and Nile really got into his role play by combining his new and already beloved pirate sword with some Star Wars headgear.

In conclusion to my rather long and detailed write up on Geronimo, did the kids have a good day? They had an amazing day.

Did mum and dad have a good day? Yes, an amazing day.

Could the day have been any better? Only if we could have stayed for at least another few hours, or even better, if we were going again tomorrow, as there were so many wonderful things there we didn’t get chance to see / do.

Would I recommend the festival? Definitely, definitely, yes.

Geronimo was one of the highlights of our year last year and I think I can safely say it will be one of, if not the, highlight of this year.

In Emily’s words “We love Geronimo! Can we go again next year?”

The Geronimo Festival is on all bank holiday weekend – Saturday through Monday – to book tickets, please visit www.geronimofest.com