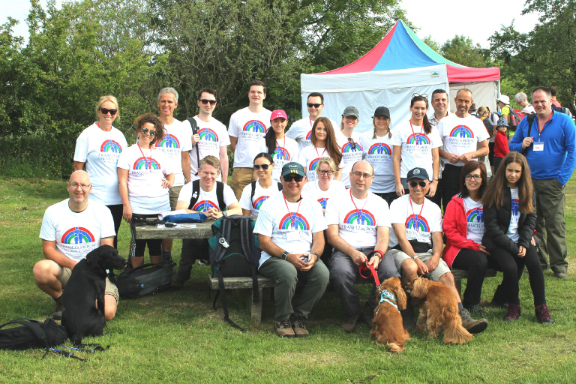 Above: Myerson Solicitors Team who took on the Francis House Cheshire Three Peaks 2018

Tegg’s Nose Country Park in Macclesfield, teemed with ramblers, as supporters of Francis House took to the hills for the annual Cheshire Three Peaks Challenge.

Taking part against the odds was 60-year-old Beverley Scott-McGrory, from Culcheth, Warrington. Two years ago she was wheelchair-bound with little prospect of walking again, having contracted viral meningitis whilst working as a ward sister.

An abnormal build-up of cerebrospinal fluid in the brain and numerous surgeries to treat the condition, eventually led to brain damage rendering Beverley immobile, bed-bound and in need of full nursing care.

Following a rigorous rehabilitation programme, she regained her mobility and independence and completed the 6.5 mile route collecting over £500 in sponsorship.

“My condition is often diagnosed in children, some of whom will no doubt have been supported by staff at Francis House,

“It is an honour to support Francis House. It is a wonderful place with dedicated staff giving the best care to children, teenagers and young adults in amazing surroundings.” said Beverley.

Rachel Astill, fundraising officer at Francis House, said: “We are incredibly grateful to Beverley and all of the 186 walkers who took part in the challenge. It was fantastic to see so many people push themselves to their limits in support of their local children’s hospice.”