Cigarettes and tobacco seized in crackdown 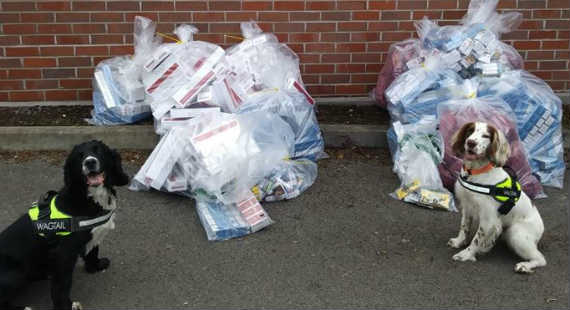 Cheshire East Council officers seized cigarettes and tobacco worth more than £12,000 during a swoop against suspected fraudsters.

More than 50,000 cigarettes were uncovered during raids by council trading standards officers on a number of properties in Crewe and Macclesfield.

Officers and sniffer dogs discovered concealed stashes of tobacco at the premises, with products hidden in various areas, including a false wall, light fittings and under floorboards. The ‘Operation Max’ swoop followed a tip-off that cigarettes were secretly being stored in a number of residential and business locations.

The cigarettes were mainly ‘cheap whites’ – foreign imports brought into the UK, which are illegal due to the non-payment of duty. Councillor Janet Clowes, Cheshire East Council cabinet member with responsibility for safer communities, said: “As an enforcing council, we work hard to keep harmful products off the streets and will crack down on businesses, criminal gangs or individuals who flout the law.

“All tobacco is harmful but the illegal black market in tobacco, and in particular the availability of cheap cigarettes, makes it harder for smokers to quit and remain smoke free. Detection dogs can find tobacco and cigarettes in the most unlikely places and, in addition to having their stock confiscated, offenders could face unlimited fines and up to 10 years in prison.

“This operation was intelligence led and local information really helps to get successful results. I would like to thank anyone who has provided information to the council, Cheshire police, or who has reported to the national ‘keep it out’ website – which allows people to report anonymously.

“Our communities do not want illegal products on their streets which can be harmful to health and linked to more serious criminal activity – and we will act to ensure offenders are brought to account.”

Further investigations will now take place with a view to prosecutions through the courts.

You can report any information on smuggling or illicit trading, anonymously, via the government’s keep it out website or by calling 0300 999 0000.