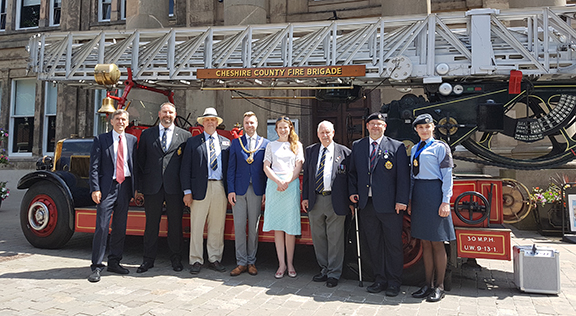 The well-supported and attended parade, comprised local veterans, cadets and scouts from across local communities – who set off from Castle Street and made its way towards the Market Place. Supported by Macclesfield MP, David Rutley and many local residents, the Mayor of Macclesfield, Cllr Adam Schofield, took the salute.

The parade was followed by a small service of thanksgiving outside the Town Hall.

There were a number of vintage army vehicles and fire engines on static display outside the Town Hall, adding to the colour and spectacle of the day.

The event was organised by the Macclesfield branch of the Royal British Legion (RBL), with the support of other local organisations that work to assist Armed Forces members and veterans, including: Age UK Cheshire East; Macclesfield Armed Forces Breakfast Club; the Army Families Federation; and St John Ambulance. David met with the local RBL branch chairman, Cllr Alan Williams, and thanked him for the organisation’s important work in supporting veterans in local communities by ensuring they are aware of and can access local support services.