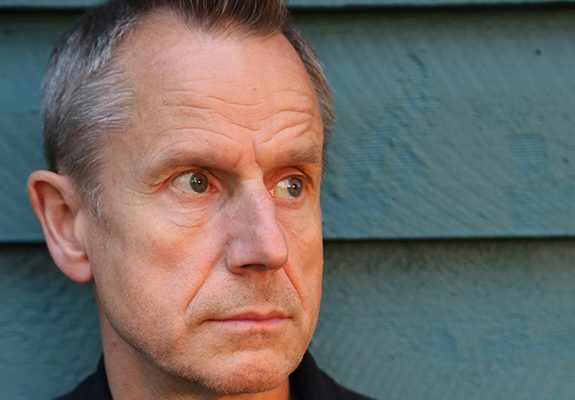 Following a sellout tour last year, Jeremy Hardy has hit the road in 2018 with his new show – scheduled to visit Leek on 12th October.

The show sees him at his politically astute best but paying more attention to the human condition. With Brexit, Trump and the world in general, he has plenty to talk about – but who is the man behind the mirth? What makes him tick? What keeps him awake at night? What does he fear, and hope for?

Jeremy is enjoying his fourth decade as a stand-up comedian. That’s a more dramatic way of saying he started 34 years ago and, without a lottery win, probably has at least another 34 years to go. He’s managed to pack a fair bit into his career already though, what with being part of the furniture of BBC Radio 4 (At Home With The Hardys, Jeremy Hardy Speaks to the Nation, The News Quiz, I’m Sorry I Haven’t a Clue, and recentlyJeremy Hardy Feels It), TV work such as Now Something Else with Rory Bremner, Blackadder Goes Forth, and Jack Dee’s Helpdesk, and films such as Hotel, How to Be (with Robert Pattinson),and Jeremy Hardy v the Israeli Army (in which he challenged the military occupation of the West Bank). He has written columns for The Guardian and Red Pepper, and three books: When Did You Last See Your Father, Jeremy Hardy Speaks to the Nation,and My Family and Other Strangers.

Back in 1988 Jeremy won the Perrier Award at the Edinburgh Festival, and in 1991 he bagged Best Live Act at the ITV Comedy Awards. Since then he has never stopped gigging, and there’s a good chance he’s performed in every town in the UK. Here’s a wee taste of a recent show: https://www.youtube.com/watch?v=L_AotzQAkIM