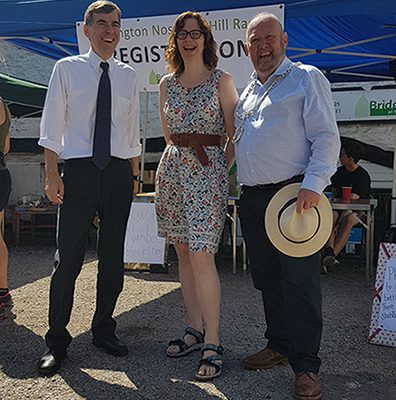 In spite of the hot weather, there was a strong turnout for the race – started by Macclesfield MP, David Rutley and the Mayor of Bollington, Cllr Jon Weston.

The 7.11 mile course of mixed terrain, including road; pasture; high moorland and canal towpath in the beautiful countryside around Bollington. This was the 14th Bollington Nostalgia Hill Race, and it continues to go from strength to strength. It was the first time that the race featured the participation of the newly-formed Bollington Harriers running club, set up by the former Mayor of Bollington, Cllr Andrew Langdon, who also took part in the race.

The race is organised by the much-valued Bridgend Centre, and raises vital funds for the Centre whilst also being a fun day for people to get outdoors and experience the mental and physical health benefits of fell-running. These and other funds support the Bridgend Centre’s vital work to reach out to those in and around the Bollington community who are feeling isolated or in need of improving their mental wellbeing. As the Centre’s Patron, David Rutley is a strong supporter of its important endeavours.

Share this...
Related Items
← Previous Story Is Macclesfield about to lose Mothercare?
Next Story → Summer activities at Tatton