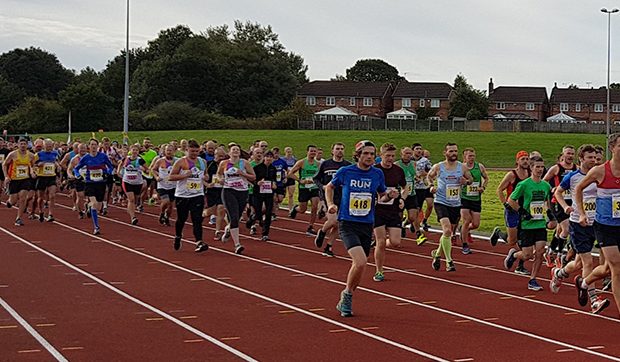 An impressive 600 people took part in the half marathon, starting and finishing at the athletics track at Macclesfield Leisure Centre, and covering a variety of challenging and steeply-graded terrain through the scenic countryside around Macclesfield, Prestbury and Over Alderley. All those taking part received a goody bag and a medal, and there was an extensive prize list for the fastest runners.

Alongside the main race, there was a shorter 5K course, which also starts at the Leisure Centre and follows the first half of the half-marathon course, as well as the popular 1,200 metre fun run, which takes place entirely within the grounds of the athletics club. The latter race is intended for families and young children, with a trail and grass sections. The minimum age to enter the Fun Run is 3 years old, and children aged 5 or under must be accompanied by an adult during the run.

As is traditional, the half-marathon raised much-needed funds for a number of well-respected local charities. This year’s nominated charities were The Rossendale Trust, Just Drop-In and Cre8, all of which work with real commitment and energy to support people in local communities. Last year’s race saw over £10,000 donated to East Cheshire Hospice, The Rossendale Trust and Just Drop-In, and the race organisers, all of whom are volunteers, hope that a similar amount has been raised this year. All the profits from the race are donated to the selected charities.