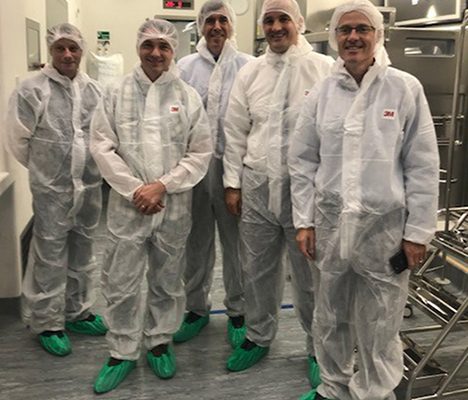 On their visit, David and the Minister were given a tour of the 100-acre site by Andy Evans, the Head of the Macclesfield Campus, and his senior leadership team. At the company’s production facilities, David and Mr Berry saw for themselves the intensive work involved in the manufacturing and distribution of the many vital medicines produced at the Macclesfield site, including those developed for the treatment of prostate cancer. David was also pleased to meet with some of the company’s highly-skilled employees involved with taking forward this vital work.

As well as being an important local employer, AstraZeneca continues to operate highly-sought after and successful apprenticeship and degree apprenticeship programmes, as well as its global graduate schemes. David was pleased that Mr Evans confirmed that the company remains committed to promoting these important apprenticeship schemes and to continuing to invest in the talents of the next generation, and furthering opportunities for them to take the first step on the career ladder in the pharmaceuticals sector.

The Macclesfield Campus is AstraZeneca’s second largest global medicines development and manufacturing site, and its European centre for packaging, from which a range of medicines are manufactured and distributed to around 130 global markets. The Campus also hosts astrategic IT function for the company and a number of support functions.

Speaking after his visit, David said, “AstraZeneca continues to be a vital presence in the Macclesfield, northern and national economies, and a leading local employer. It was great to once again view the site’s production facilities and to gain further insight into the company’s leading role in the global pharmaceuticals industry. I will continue to work closely with AstraZeneca’s leadership team to support the company going forward.”