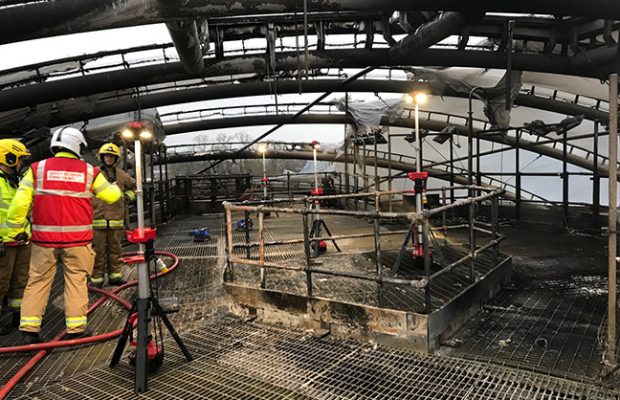 Last Saturday morning (15th December) Cheshire Fire & Rescue were called to a large fire at Chester Zoo. The blaze was in the Monsoon Forest Habitat on the site, which is the UK’s largest zoo building.

Due to the scale of the fire it was declared a major incident. The zoo was immediately evacuated and a cordon was put in place. Firefighters – wearing breathing apparatus and using main jets – brought the fire under control and extinguished the fire. The area where the fire started was significantly damaged but the actions of the fire crews stopped the spread of the fire to the rest of the building and saved a large portion of it. Firefighters also helped the zoo keepers to move some of the animals away from the fire. They helped staff manually move some small reptiles such as turtles and tortoises, and helped staff to shut the gates behind the large mammals, such as gibbons and orangutans, after the zoo keepers had coaxed them into their outside habitats.

The zoo have confirmed that the critically endangered Sumatran orangutans and other mammals were all accounted for but have sadly confirmed that a number of insects, frogs, fish and small birds died as a result of the fire.

The investigation into the cause of the fire is ongoing but at this stage we believe that it was accidental. Saturday was one of the toughest days in Chester Zoo’s long history. The remarkable efforts from the zoo team and the emergency services meant the fire was extinguished as quickly as possible and all visitors safely evacuated.

All of our mammal species – such as critically endangered Sumatran orangutans, Sulawesi macaques, endangered silvery gibbons and even birds such as rhinoceros hornbills were led to safety by our conservationists in partnership with the emergency services.

However, now that our teams have started to assess the site, we are devastated to confirm the small number of species that we were unable to save. These include a number of question mark cockroaches, Amano shrimps, betta hendra fish, cinnamon frogs, tentacled snakes and birds such as grosbeak starlings.

These animals were all part of conservation breeding programmes and we will look to be part of those vital projects once again in the near future.

In a more positive light, new homes have been found within the zoo for all of the animals that were led to safety and our teams are working around the clock to relocate those animals and get them settled. Our conservationists will continue to move animals into their new habitats over the coming days. Some species such as the Sunda gharial crocodiles, painted batagur turtles and giant Asian pond turtles remain inside Monsoon Forest in an area unaffected by the fire, and remain in good health.

The investigation into the fire and its cause is ongoing, and we will continue to work hand in hand with the relevant authorities in the coming days and weeks.

As a world class visitor attraction, we are fully insured and we will be working with our insurers in the coming weeks as we look to start rebuilding the UK’s largest zoological building, Monsoon Forest.

And finally, the whole Chester Zoo team have been humbled by the incredible amount of support and kindness from the local community, our members, visitors and the general public. On one of the toughest days in our long history, it reminded us all that the zoo holds a very special place in the hearts of so many of us, and lifted spirits of the whole team.

We have been overwhelmed by the amount of spontaneous donations made to the Just Giving page. The generosity has been truly humbling and all the money given will go directly towards our conservation projects both here in the zoo, and around the world. As a wildlife conservation charity, we will continue our mission to prevent extinction.