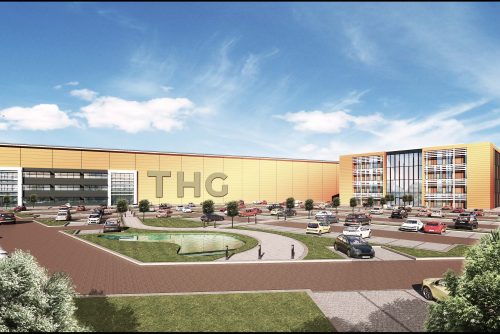 The Hut Group – one of Manchester’s fastest growing companies – has been granted planning permission to build the largest purpose-built office development in the North West – which will eventually be home to 10,000 staff.

The online retailer is planning to develop one million sq ft of office and studio space over two sites near Manchester Airport. The largest of the two buildings will be home to a new landmark business campus.

The Hut Group employs around 5,000 people, of which around 1,000 are currently based at its Manchester Airport offices. The development will create 184,000 sq ft of office space with a glass and steel-look design inspired by the iconic Pepsi-Cola Corporation world HQ in New York.

He said: “The Hut Group is one of the world’s largest online beauty and wellbeing businesses, and we are excited to continue moving forward towards delivering a truly world-class business campus that will bring a critical mass of up to 10,000 people to the site as the scheme’s first major anchor. We’ve also seen a significant uplift in occupier interest, so the two new office buildings will help to cater for this future demand, as well as addressing the lack of supply of Grade A office accommodation in the city region, bringing a total of 184,000 sq ft of office space to the market. Progress at Airport City Manchester is now truly gathering pace and alongside our plans for a new £250m hotel district and the unrivalled growth of the airport, 2019 is set to be a hugely significant year in the creation of this new commercial business hub in the North of England.”