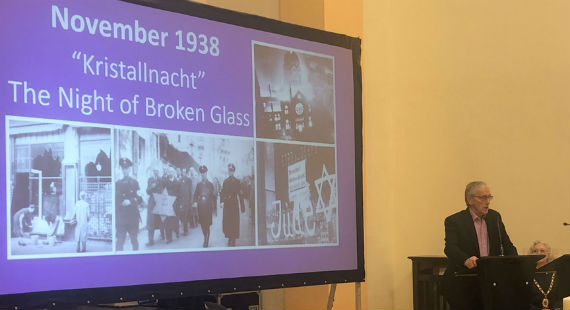 The service was marked with a powerful combination of wartime experiences, poetry recitals and performances from a Jewish choir. It concluded with the lighting of candles and a two minutes’ silence, followed by prayers.

The event was attended by the leader of the council, Rachel Bailey and the council’s acting chief executive Kath O’Dwyer. They were joined for the service by Danny Herman, Rabbi Dovid Lewis, of Manchester’s Bowdon Synagogue, Mayor of Cheshire East, Councillor Lesley Smetham and her deputy Liz Durham.

Mr Herman gave an account of his experiences during the Second World War describing how he was one of the fortunate few that escaped from the Nazis.

He said: “I was very lucky that my father was able to get away on a boat in the summer of 1939 and that I followed with my mother two months later.

“Ours was the last boat to leave Hamburg and we arrived in England on 2 September – a day before war broke out. I know that things could have turned out very differently.”

Rachel Bailey, leader of Cheshire East Council, said: “We will continue to remember the Holocaust and subsequent genocides and never forget the horrendous acts that were committed on so many innocent people.

“I am very pleased that this event was so well attended by such a diverse range of our local communities. I thank Rabbi Lewis for bringing a choir from the North Cheshire Jewish Primary School along today and to all those who contributed so much to this important occasion, especially our equality, diversity and inclusivity officers.”

Rabbi Dovid Lewis, who also spoke at the ceremony, said: “Holocaust Memorial Day services provide us with a vital opportunity to engage with people from all backgrounds. New friendships can be formed, which take the commemoration far beyond this one day.

“We often refer to lessons learned from past atrocities and it is a tragedy of our times that they still happen across the world, but by meeting, discussing and sharing the hand of friendship with each other today, we are showing that no matter what our personal beliefs are, we are stronger together.

Holocaust Memorial Day has taken place on the same date since it was introduced in 2001. January 27 was chosen as that was the date when the Nazis’ notorious Auschwitz concentration camp was liberated by Soviet troops in 1945.

The Holocaust resulted in the annihilation of an estimated six million Jews, two million Gypsies, 15,000 homosexual people and millions of others by the Nazi regime and its collaborators.

Since 1945 there have been several other attempted genocides across the world – including Rwanda, Cambodia and Bosnia – and these are also commemorated on Holocaust Memorial Day.

This was the seventh consecutive year the council has held an annual Holocaust Memorial Day commemoration and the first time it was held outside Sandbach.