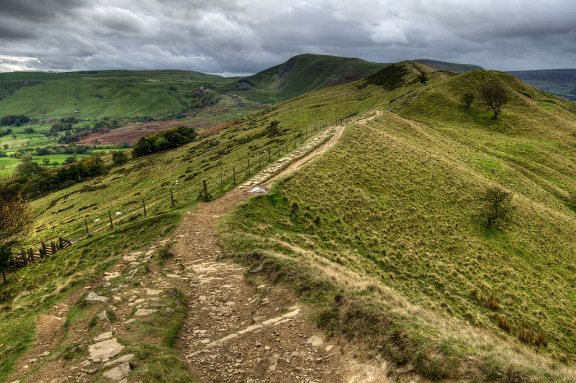 Above: A stretch of the Great Ridge path between the Vale of Edale and the Hope Valley is to be repaired.

Two of the most popular routes in the Peak District National Park are set to benefit from the results of a year-long national fundraising appeal.

A stretch of the Great Ridge footpath, between Mam Tor and Lose Hill, and Cut Gate, on the Derwent Moors, are to receive funds raised from the Mend Our Mountains: Make One Million campaign.

The campaign was a collaboration between the British Mountaineering Council (BMC) and UK National Parks that aimed to raise £1 million for vital path repairs in 13 major projects.

The national campaign has raised around £715,000 so far. This money will now be spent on repairing some of the nation’s best-loved upland routes.

Thanks to the efforts and generosity of individuals and groups, the two Peak District National Park routes, will benefit from £100,000 raised for the Great Ridge and £75,000 raised for Cut Gate.

Sarah Fowler, Peak District National Park Authority chief executive, said: “It is fantastic that organisations, businesses, campaigners and the public have come together to raise these vital funds for repairs to the Great Ridge and Cut Gate. It is important for these routes and their surrounding landscapes to be protected for people to enjoy now and in the future.”

Carey Davies, BMC hill walking officer and Mend Our Mountains campaign lead, said: “The support for the Mend Our Mountains: Make One Million campaign for repairing routes in our National Parks has been phenomenal. This has very much been a collective effort and I can’t thank everyone enough for the support and enthusiasm that has been given to this ambitious, unprecedented project.”

Large donations were received from the Oglesby Trust, South Yorkshire and North East Derbyshire Ramblers, and the British Horse Society’s Paths for Communities Fund. Other significant funding was raised by mountain bikers, horse riders, and members who donated, organised events or took part in crowdfunding.

Chris Maloney, from Peak District MTB and Keeper of the Peak, said: “We all have a role to play in promoting responsible enjoyment of our National Parks. The Cut Gate campaign has been a great opportunity for us to demonstrate advocacy in action, recognising the impact of cycling, horse riding or walking and doing our bit to raise awareness and funds for the ‘Bog of Doom’.”

Mike Rhodes, Peak District National Park Access and Rights of Way manager, said: “Mend Our Mountains has been a great partnership effort with user groups and partner organisations. Organisations like the Ramblers, Peak District MTB, Ride Sheffield, Peak Horse Power and Keeper of the Peak have helped galvanise public support and donated significant time and money to the campaign. We’re thrilled that the money will enable the Cut Gate bridleway and the worst section of the Great Ridge path from Hollins Cross to Back Tor to be repaired.”

There is still time for people to make donations for Great Ridge path repairs at https://mendmountains.thebmc.co.uk/donations/great-ridge/.

Cut Gate:
The £75,000 raised will repair the notorious ‘Bog of Doom’ on Cut Gate bridleway, above Derwent Reservoir. Moors for the Future Partnership has appointed specialist contractors to carry out the repairs to protect the landscape and wildlife, as the route crosses a Site of Special Scientific (SSSI) – protected for its international importance for nature. Work will start after this year’s bird nesting season, and is expected to take several months.

Great Ridge:
Significant footpath repairs will take place later this year on the Great Ridge above Castleton, to see a stretch of path from Hollins Cross towards Losehill restored. Specialist contractors will use reclaimed flagstones to re-establish a single footpath along the ridge. The natural vegetation alongside the path will be reinstated reducing the erosion scars which are visible on this popular route.