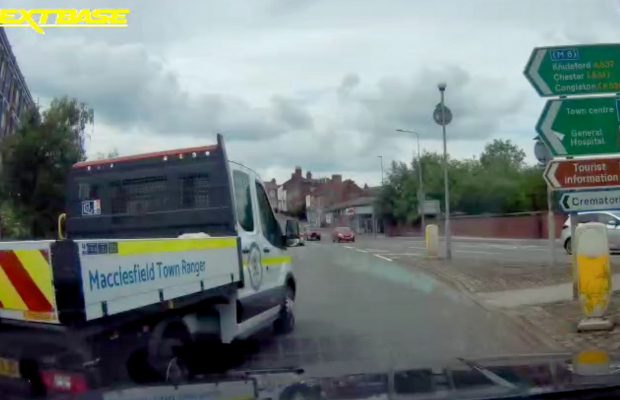 I think Macclesfield Town Council should invest in a new mask for their new Lone Ranger – I have to assume the one they’ve provided hasn’t got large enough eye-holes.

Check out the driving skills of the Macclesfield Town Ranger van reg number MX68 XJG in the video at the bottom of the item. We are approaching the Tesco roundabout from Hurdsfield Road. There are three lanes – lane 1 for traffic turning left, 2 for traffic going straight on up Hibel Road or 3 for going straight on in the right hand lane up Hibel Road or turning right onto the Silk Road.

As I was planning to go up the hill in the right hand lane I positioned myself in lane 3.

Half way around the roundabout, without checking his mirrors or signalling, he pulls over to the right, cutting across me into the right hand lane.

As I had my three year old grandson in the back and didn’t express the usual Anglo Saxon expletives.

When I get to the top of the hill there are two options for us – turn left into Churchill Way or right into Cumberland Street.

Sadly I encountered numpty number two, Mr Bean, reg number MC18 JHY. He was in the left hand lane, but decided he would ignore the directional signs and go into the left hand lane but turn right – again cutting in front of me.

A crash was avoided in both these incidents because just one of the drivers was paying attention – me.

If you know the Lone Ranger or Mr Bean let them know they’ve been caught on camera.

Inevitably Cheshire Police were nowhere to be seen – likely as not their traffic cops were otherwise engaged hunting down speeding vehicles. Guys, speeding doesn’t cause accidents. Sure it contributes, but it’s lousy driving, careless driving and downright dangerous driving that’s the cause of most accidents.

Watch the video at: https://youtu.be/j7EGJJSw7DI