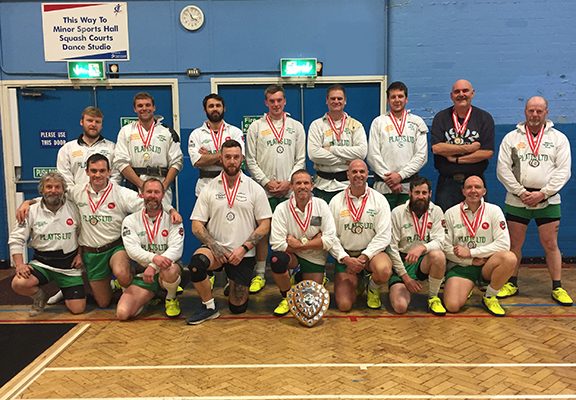 Bosley are competing on the indoor circuit for the first time in ten years with a squad of 18 pullers.

At this year’s AAA Indoor Championships, Bosley competed in both weight categories reaching the final of the catchweight competition where the team finished second after being defeated by defending champions from 2018 Uppertown from Derbyshire. However, Bosley went one better in the 640kg competition where they again reached the final where they met 2018 winners Kilroe from Lancashire. In a tough match, Bosley came away as 2 ends to 0 winners to win the gold medal.

“This was a great result for our club” commented Bosley spokesman Alan Knott. We have recruited a number of new members this year, so decided to take part on the indoor circuit to get our newer members ready for the 2020 outdoor tug of war season”

“We didn’t really know what to expect going into this years indoor tug of war season, so to come away with a gold and a silver at the AAA championships is a remarkable achievement. In just under 3 weeks time we will be taking part in the Tug of War Association national indoor tug of war championships, which will be another step up in competition and we look forward to seeing what we can achieve there”

“We are always looking for new members to join our club – as the sport is held in weight categories, the more members we have, the more competitions we can enter, so if anyone is interested in joining our club, then feel free to make contact with us”

You can find out more about Bosley Tug of War Club and drop them a message to join their team via Facebook, Instagram and Twitter by searching for @bosleytugofwar or you can contact Alan Knott on 07976 591222. Further information about the sport of tug of war is also available on the Tug of War Association web site at www.tugofwar.co.uk