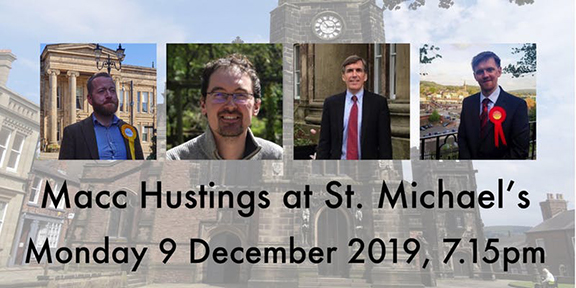 There will be two public hustings events in Macclesfield in the run-up to the General Election on 12 December.

The first event is for under-30s and particularly aimed at first-time voters. It will take place at 4pm on Saturday 7th December at Tytherington School, Manchester Road, Macclesfield.

The second hustings is open to everyone and will be on Monday 9 December at 7.15 pm in St Michael’s Church, Market Place, Macclesfield.

Each candidate will make their case to be elected Macclesfield’s next MP in short presentations about national and local issues and what they will do for Macclesfield. This will be followed by live questions from the audience.

Turn out in Macclesfield at the last election in 2017 was slightly above average at 72.38 %, but the number of under-35s nationally who cast their vote was well below that. The deadline for registering to vote in the general election is midnight on 26 November, go to www.gov.uk/register-to-vote (26 November is also the deadline for postal voting).

The Macc Hustings is being organised by a team of volunteers. “We believe it’s important that Macclesfield residents have the opportunity to see, hear and question the candidates together,” said Lynne Jones, one of the organisers.

The secondary schools, lead by Tytherington School, want to ensure that under 30s and new voters can get first-hand information from the candidates.  The questions will focus on issues that affect young people – in Macclesfield as well as nationally.

Both events are supported by Hope, the organisation of churches in northeast Cheshire.

Both events are free and there’s no need to book, but to guarantee a place and have a chance to submit a question, register via Evenbrite: here for Under-30s on Saturday 7 December, here for the general hustings on Monday 9 December.