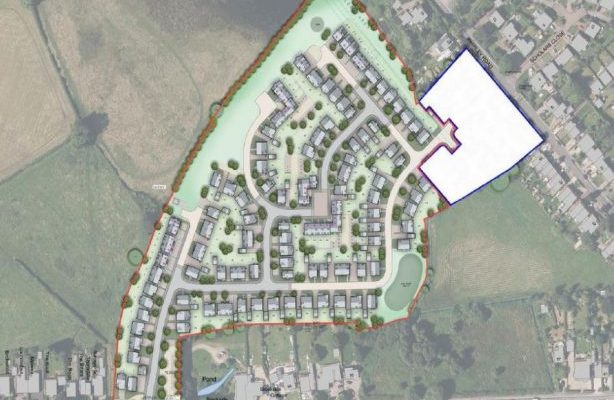 Controversy over three proposed schemes off Chelford Road near Macclesfield has intensified following publication of a flood risk report.

Developers Bellway, Jones and Redrow plan to build almost 400 homes across the three sites, which already have outline consent. The applications, however, have met with continued opposition from local residents and the parish council over the past year.

Now, a flood risk report commissioned by an objecting party, Henbury Parish Council, has threatened to stall the plans. The report by consultancy Weetwood highlights “serious shortcomings in the flood risk and drainage assessments provided for this and the neighbouring developments, all of which lie within a Critical Drainage Area known for flooding in parts,” according to the parish council, which describes the report as “damning”.

In December, Redrow said that its one-, two-, three-, four- and five-bedroom scheme would include 30% affordable housing and generate community contributions of over £1m for primary and secondary education, highways improvements, outdoor and indoor sport contributions and local healthcare provision.

The parish council has also raised concerns that, if the developments go ahead, there will be a shortage of 392 high school places in the local area.

The sites are allocated for housing under the local plan, alongside a further vacant site to the north of Chelford Road which is not included in the application.

A previous objection from environmental lobby group Save Macclesfield Greenbelt, said: “Overall, this is a developers’ plan for profit at the expense of Macclesfield residents.  It will not improve the economic, social and environmental conditions of the people who live here.

“It is time to rethink and take a more positive approach to this significant development, so that it is of benefit to the residents of Macclesfield.”

Andy Martin, land director at Bellway Homes, said: “We are aware that a hydrology report has been submitted to Cheshire East Council by a local group objecting to our planning applications. Our consultants are scrutinising the validity of any objections raised.”

“The site has an Outline Planning Permission, with an approved Flood Risk Assessment which confirms that by utilising the design principles detailed within the report, there will be no residual flood related risks remaining after the development has been completed.”

“We are currently addressing consultee comments. We have been working towards the February planning committee meeting.”

Share this...
Related Items
← Previous Story Walking to Poynton and Pott
Next Story → King Arthur and the Knights of the Moss Rose . . . Forest Green Rovers (Home)