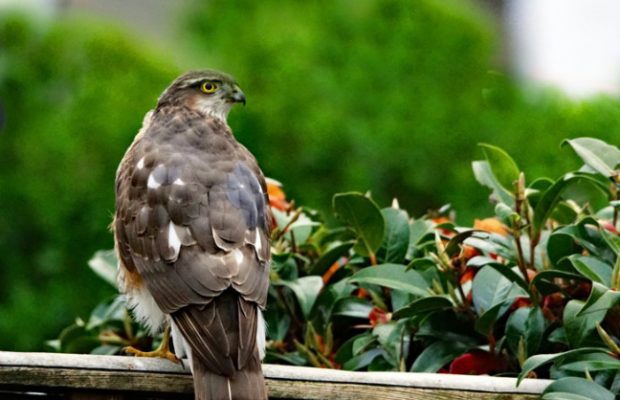 A wonderful image of one of Britain’s most notorious raptors – the sparrow hawk – from local wildlife photographer Paul Beech.

The Sparrowhawk has pale barred underparts, like the Goshawk, but is less heavily built.

The wings are short, broad and blunt and the tail is quite long and has dark barring across it. Their yellow legs are surprisingly spindly. The eye and cere are also both yellow, but they can become orange-yellow or even orange-red in older birds. The hooked bill is grey.

The female (or falcon) has grey-brown upper parts and is much bigger than the male (or tercel), which is a little bigger than a Mistle Thrush but smaller than a Kestrel. The barring on the whitish underparts is brown.

The male has grey-blue upper parts and the barring on the whitish underparts is orange-brown. The cheeks are orange-brown too.

Juveniles have dark brown upper parts and coarsely barred below.

In flight, they tend to soar between powerful bursts of several wing beats: flap-flap-glide. They never hover and are remarkably agile even at speed.