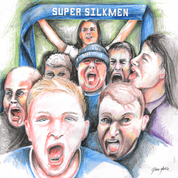 A song born out of a burning passion for a football club on the brink of extinction: Glass Ankle songwriter in chief, Greg Jackson, was deeply despairing as Macclesfield Town FC were wound up in the High Court with debts totalling more than £500,000, and subsequently expelled from their league.

The writing was on the wall for the club that had been a constant in his life from a young age, having regularly attended matches with his father and friends right up until lockdown hit. In the face of the devastation, he channelled his thoughts and feelings to create a song that communicated what The Silkmen meant to him.

The song was called “Save Our Silkmen”, and a demo was released in October – well received by fellow fans struggling to process their beloved club’s demise – a call to arms designed to rally people together in the fight to secure Macc Town’s future. A proper release had been planned for later down the line, any money from which would have been donated to the supporters’ trust to help create a phoenix club.

Around two weeks later, businessman and Macclesfield native, Rob Smethurst, thankfully purchased the club, rebranding it as Macclesfield FC in the process. The club was saved and is now due to restart in the 10th tier of English Football! Obviously, this outweighed the tinge of disappointment that came with the song being out of date!

Spurred on by the fan response to the song, Greg decided to still go ahead and record a more polished version with tweaked lyrics to reflect the new sense of optimism. “Super Silkmen” is the result. Fans were invited to sing on the record in the brief period when lockdown was eased, along with some of Greg’s friends and family. It was a tricky process, even more so as the band’s studio is in the town of a rival club… Stockport!

“Super Silkmen” adeptly captures the experience and essence of supporting Macclesfield. The lyrics (see below) are poignant, nostalgic, and full of pride, and are intensified by the upbeat and driving guitar-led musical accompaniment which provides sonic delights throughout. It is a love song in the purest sense that will no doubt prove moving for many Silkmen supporters and will galvanise them as the club embarks on its new beginning.

“Super Silkmen” was recorded and mixed by Greg Jackson at home and at Cutthroat 2 in Stockport. It was mastered by Andy “Hippy” Baldwin (The Who, Oasis, Interpol) at Metropolis Studios in London.

It will be available for consumption on all major streaming and download platforms from Friday 12th March. All money will be donated to Macclesfield FC and The Silkmen Supporters Trust to be used for the regeneration and rejuvenation of the club and its facilities.