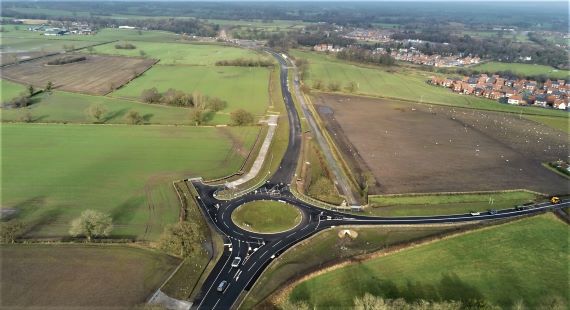 The new Congleton Link Road will be officially opened to traffic from lunchtime next Monday, following a low-key official event, owing to Covid-19 restrictions.

The road links the A536 Macclesfield Road, at Eaton, to the A534 Sandbach Road to the west of Congleton, just beyond Somerford.

Unfortunately, the public will not be able to attend the official opening, but it will be publicised on the council’s website and local press have been invited to witness the first vehicles using the road, which will follow a brief ribbon cutting ceremony.

Due to the pre-election period, only officers of the council and representatives from the contractors Graham will be attending.

However, from late afternoon this Friday (16 April), members of the public will be allowed to walk the road and cyclists can also be among the first to explore the £90m bypass, which is to be named after Congleton’s pioneering educationalist Elizabeth Wolstenholme Elmy, who also campaigned for women’s suffrage.

The 5.5km road will relieve Congleton of much of the traffic congestion the town has experienced, while also opening up 20 hectares of potential employment land.