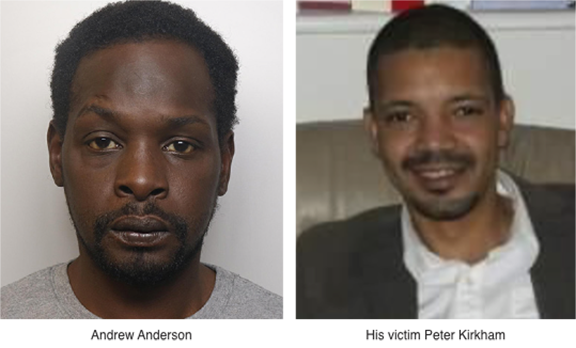 A man who controlled and physically abused his flatmate in Macclesfield has been found guilty of his murder and sentenced to life imprisonment.

Andrew Anderson stabbed Peter Kirkham in the chest inside their property on Stirling Close before calling paramedics.

The 35-year-old claimed Peter had inflicted the injuries on himself. However, the knife that was placed next to Peter at the scene was not the weapon that killed him. Instead it had been discarded by Anderson earlier in the evening when he was seen throwing it over a nearby fence.

Anderson had subjected Peter, who was 45, to a sustained assault involving blunt force trauma and injuries from a knife, which were inconsistent with self-harm. His death came after a period of being controlled and physically harmed by Anderson who isolated him from his family and friends.

A unanimous jury today Friday 21 May found Anderson guilty of Peter’s murder following a 16-day trial at Chester Crown Court and was sentenced the same day to a life imprisonment where he will serve a minimum of 18 years in jail.

The behaviour started after Anderson began sharing Peter’s flat in July 2019. The pair were known to each other through Anderson’s sister and he would often refer to Peter as his ‘cousin’. The court heard Peter’s brother describe how difficult it had been to contact him.

Anderson commandeered Peter’s mobile phone by putting his own SIM card into it and would say Peter was busy. He also controlled him financially by using his bank account and credit card. He had no income, he was frequently short of money and therefore would, on occasions, get Peter to shoplift for him.

On the night of Peter’s death Anderson claimed he was asleep and woke up at 1.45am on Wednesday 23 September to find him unresponsive. However, analysis of his mobile phone showed he was texting and communicating with a number of people for large parts of the evening and into the early hours.

Peter is believed to have been killed some time between 5pm on Tuesday 22 September and 2am on Wednesday 23 September. When Anderson called paramedics Peter had already died.

Following his arrest, Anderson was taken into custody for questioning and subsequently charged.

Detective Sergeant Helen Tennyson, from Cheshire Constabulary’s Major Investigation Team, said: “It is a deeply sad and tragic case and my thoughts remain with Peter’s brother, his family and his friends.

“Anderson was a volatile man who controlled Peter preventing him from living an independent life. He physically abused him and isolated him from his loved ones.

“Even on the day he took Peter’s life he still wanted to be in control of the situation by fabricating what happened in order to cover himself.

“He left Peter feeling threatened, scared and trapped in a terrifying situation that he just couldn’t or wouldn’t be able to get out of.

“I hope that the guilty verdict today provides some closure for Peter’s family after everything they have been through.”

Peter’s brother Paul Kirkham has paid tribute to his brother on behalf the family: “The Kirkham family and friends of Peter would like to thank everyone at Cheshire Constabulary for the help and support they have given to us and for their thorough investigation into Peter’s passing.

“I would like to show a big appreciation to DC Craig Stevens, our family support officer, who has helped me throughout the case and kept me up to date with everything that has been going on.

“I also want to say a big thank you to everyone that has helped to get justice for Peter’s tough last months leading to his death.

“Now he can find peace in heaven.

DS Tennyson added: “Cases like this show that coercive and controlling behaviour and physical abuse can happen to anyone in any situation. It can be really difficult for those who are suffering to have the strength and courage to speak out about what they’re going through for fear of reprisals from those who are controlling their lives.

“I want people to know that there is help and support available and I would encourage anyone in a similar situation, or if you know someone who may be going through this, to please contact us.”