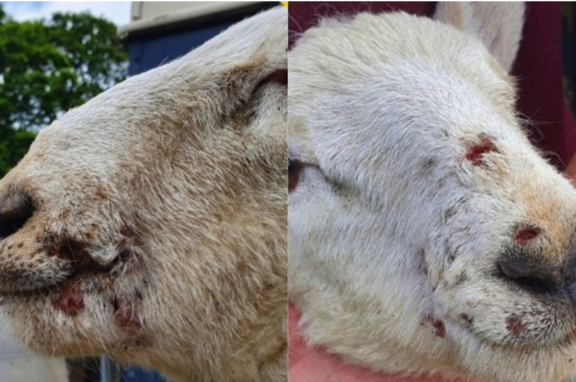 The first attack took place in fields in Pott Shrigley on May 19 when a dog, off its lead, attacked nine lambs – killing some of them.

Police say that a large Doberman-style dog had been seen running among the animals.

PC Jim Clark, from the Cheshire Police rural crime team, said: “The offending dog would have traces of blood over its face. There are very few public footpath close by however there are a number of residential properties and properties undergoing renovation near the land.”

“If you are lucky enough to live somewhere that backs onto open fields are you confident that your dog isn’t ‘going on an adventure’ from your property and out of sight.”

The second attack again occurred in fields in Pott Shrigley on May 24, when a lamb suffered head and leg injuries.

Posting it on Facebook PC Clark said: “Yet again this is the horrific truth of one of the consequences of a livestock attack.”

This lambing season has been particularly fraught, earlier this month two lambs were killed in an attack by a dog in fields next to the Macclesfield Canal, near the AstraZeneca site.

Another three died in Over Alderley in March when a dog off its lead also bit their shepherd.

And another incident in March in Poynton saw a farmer verbally abused by a dog owner when he was asked to put his pet on a lead after it had been harassing sheep.

Across the county in the first three months of 2021, 50 sheep have been killed by dogs – and two dogs have been put down.

Anyone with information about the latest incident can call police on 101 quoting reference number IML 992043 or Crimestoppers anonymously on 0800 555 111.