Home / Community / A bronze for Bosley Tug of War team

A bronze for Bosley Tug of War team 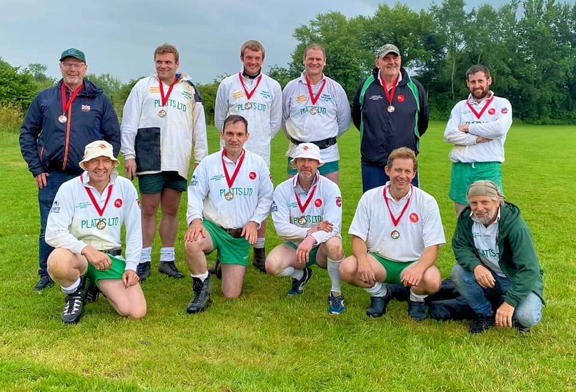 Bosley Tug of War Club took part in the Tug of War Association’s National Outdoor Tug of War Championships in Oxfordshire over the weekend, coming away with a bronze medal.

The National Championships are held across a number weight classes for mens teams, ladies teams and mixed teams, with Bosley taking part in five of the mens 640kg, catchweight (no weight limit) and 720kg weigh divisions as well as taking part in the mixed 580kg competition where teams comprise of 4 men and 4 ladies each.

Bosley went along to the championships with a squad of 10 men and 4 ladies, and were up against some tough competition from teams all over the country on the day. The team started the day by finishing 6th overall in the 640kg competition, but a medal them came along in the mens catchweight competition where the team reached the semi finals, only to miss out on a place in the final against Essex Tug of War Club. Bosley went onto the bronze medal match against Holland Tug of War Club from Staffordshire and took a 2 ends to 0 win to secure a bronze medal, the clubs first national outdoor championship medal since 2016. The team then went into the 720kg competition, but missed out on a medal, having to settle for fourth place this time.

Bosley’s final weight class was the mixed 580kg competition, with the team competing with a number of new female pullers who were competing in a national championship for the first time. This weight class had the largest number of teams entered and is a tough weight class to win. The team held their own well, but didn’t make it out of the group stages with a chance to compete for a medal.

“we had a great day in the circumstances” commented club spokesman Alan Knott.

“with everything that has gone on over the past 18 months, and with a lot of uncertainty, we didn’t know how this season would play out. We didn’t place too many expectations on ourselves this year, but we have generally trained well, and to come away with a medal was a real bonus”

“it was great to come along with some new pullers too. They have all worked very hard and this weekend was a great experience for them. Hopefully there will be more to come”.

“We are always looking for new members to join our club – as the sport is held in weight categories, the more members of any size that we have, the more competitions we can enter, so if anyone, male or female, is interested in joining our club, then feel free to make contact with us.”

“we will hopefully organising a tug of war competition to take place in August too, so we will publish more details about that in due course”.

You can find out more about Bosley Tug of War Club and drop them a message to join their team via Facebook, Instagram and Twitter by searching for @bosleytugofwar or you can contact Alan Knott on 07976 591222. The team trains on Tuesday and Thursday evenings at 8pm. Further information about the sport of tug of war is also available on the Tug of War Association web site at www.tugofwar.co.uk