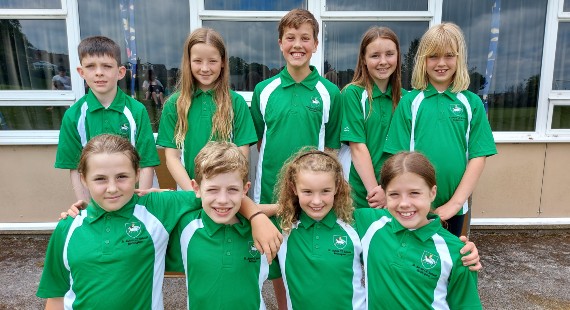 The competition, run by Cheshire East Council in partnership with energy giant Storengy UK, called for local schoolchildren to get creative and share their ideas on what they could do to combat the climate emergency.

Three shortlisted schools were lucky enough to receive a visit from energy experts at Storengy UK, who discussed the children’s ideas in more detail and supported them with further development of their thoughts on reducing carbon emissions.

Bollington St John’s was announced as the winning school – and will receive a solar panel package for their school worth up to £10,000.

The pupils wowed the judges with their idea – a phone app called ‘Planet Points’ – where points are awarded to users for sustainable actions such as turning off lights, litter picking, active travel and taking steps to lobby action and support from others.

Councillor Mick Warren, chair of the environment and communities committee, said: “Thank you to all the schools that participated in this competition. We have been incredibly impressed with both the commitment the children have shown to tackling climate change, and the level of detail each project idea demonstrated.”

“It was very difficult to select an overall winner, but we felt that Bollington St John’s really reflected our own ambition to work together to reduce carbon.

“As a council, we are taking many steps to reduce our carbon emissions and have committed to become carbon neutral in our own operations by 2025. But we know that in order to have the impact that is necessary to protect the future of both the planet and our borough, we must all come together to change our behaviour and encourage others to do the same.

“Not only did the children come up with a great idea to make reducing carbon fun, but they shared their ambition to promote the app to other schools, not just in Cheshire East, but across the UK and even further afield!”

Lily Bernadet, business development manager at Storengy UK, said: “We have been delighted to see the volume of responses and input from the children. Following our visits to the shortlisted finalists, we were extremely impressed with the knowledge demonstrated by the children on committing to combatting climate change and ideas around sustainable solutions for the future.

“It was a hard job to pick a winner from the finalists, all having their own merits and wide- ranging benefits. The enthusiasm demonstrated by all of the children taking part was really encouraging. Some of the ideas were already being put into practice and shared across the school. The future of climate change is brighter with their involvement.”

Melanie Walker, headteacher at Bollington St John’s said, “We are absolutely thrilled to have won this amazing competition. The children at St John’s are passionate about their global learning and addressing global issues such as climate change.

“They enthusiastically thought about, and designed their app, hoping it had the potential to make a real difference. We are all delighted at their success and so very proud of them all.

“Thank you to Cheshire East and Storengy UK for this wonderful opportunity, which as well as being a superb prize, also provided a chance for the children to show us exactly what they are capable of.”