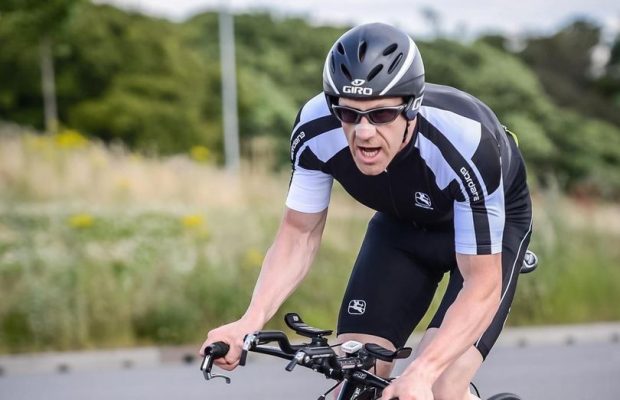 Above: 48-year-old Darren Maironis died in a collision with a van in Goostrey

Cheshire police are appealing for witnesses after cyclist Darren Maironis, aged 48, from Tyldesley, died in a collision in Goostrey – near to the Jodrell Bank Observatory.

Just before 4pm on Saturday 17 July Mr Maironis’s cycle collided with a van on Chelford Road near to the junction of Bridge Lane in Goostrey.

The 42-year-ol driver of the van was arrested in connection with the incident and has since been released under investigation pending further enquiries.

The family of Darren Maironi have paid tribute to him. Darren’s partner said: ”On Sunday 18 July, Darren Maironis tragically passed away after being involved in a road traffic collision during a time trial event in Cheshire.

“Darren was a keen cyclist and all round fitness fanatic, a loving husband, father, brother, uncle, teacher, coach and beloved friend to many.

“His passing leaves a gaping hole in our family that will never be filled and words cannot describe how much he will truly be missed.”

Enquiries in relation to the collision are ongoing and police are appealing for anyone who witnessed the collision – or has any information, which could assist with their enquiries – to come forward.

Sergeant Simon Degg said:  “This is a busy route and it’s likely that there would have been a lot of people travelling in the area at the time.  I’m keen to hear from anyone who witnessed what happened or has seen anything significant.  If you have any information – no matter how small – or dashcam footage, which could assist our investigation, then please get in touch.”

The driver of the van – aged 42 – was arrested in connection with the incident and has since been released under investigation pending further enquiries.

Anyone with any information is asked to call Cheshire Police on 101 quoting IML 1039437 or information can be passed on via https://www.cheshire.police.uk/ro/report/rti/rti-b/report-a-road-traffic-incident/