Tour of Britain returns to Macclesfield 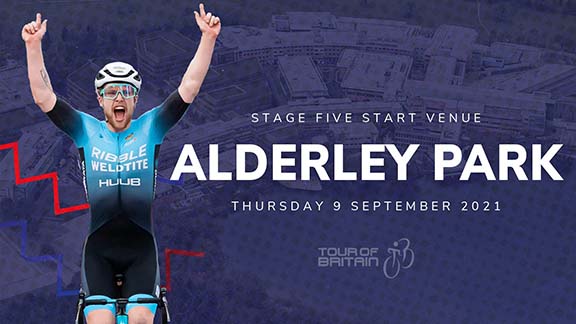 The Cycling Tour of Britain 2021 will again be visiting Macclesfield on September 9th.

Holmes Chapel, Alderley Edge, Wilmslow, Chelford and High Legh will also be bracing themselves for an influx of racers passing through, before entering Warrington via Appleton and finishing at the town’s Golden Gates.

The 152-kilometre (95-mile) stage will take in a loop through Cheshire and the fringes of the Peak District National Park.

Stage five will get underway from Alderley Park at 11.30 am taking in a route through the impressive grounds.

The route will pass famous Cheshire landmarks such as the 18th Century neoclassical Capesthorne Hall, Jodrell Bank – home to the iconic Grade I listed Lovell Telescope – and through the towns of Holmes Chapel and Congleton, the latter of which hosts the first intermediate sprint.

A trio of ŠKODA King of the Mountains climbs follow skirting below the famous skyline of Bosley Cloud and into the Cheshire Peak District, with the main climb at Bottom-of-the-Oven, a 1.7km ascent (with an average gradient of 6.9%) to just shy of the famous Cat and Fiddle.

Macclesfied, Rainow, and Adlington will all welcome the race before a second intermediate sprint at Wilmslow.

The route then heads through the town of Alderley Edge and the climb of the same name and on through Chelford, Knutsford and High Legh.

“Alderley Park’s reputation as being a world-leading campus for innovation ties in perfectly with the Tour of Britain, as the competing teams and riders leave no stone unturned when it comes to using the best and most up-to-date equipment out there to give them that crucial performance edge.”

Racing will begin in Cornwall for the first time on Sunday, September 5, with the overall champion crowned in Aberdeen, eight days later.

The Tour of Britain was relaunched in 2004 after a five-year absence from the calendar.

Live coverage of the race is shown daily in the UK on ITV4, in addition to around the world.

The Tour of Britain is part of the UCI ProSeries, making it one of the most prestigious sporting events in the sport’s global calendar.