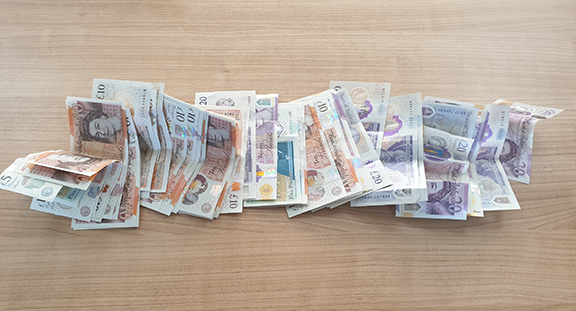 An operation aimed at tackling individuals suspected of county lines drug criminality led to drugs, cash and a knife being seized by police in Macclesfield.

An 18-year-old man had approximately £785 in cash, crack cocaine and heroin and a knife seized from him after being chased on foot by police.

He was detained in a garden on Dunster Road, Hurdsfield, after officers located him hiding under a trampoline.

Plain clothed and uniformed officers patrolled the town and the train station to disrupt drugs and money coming in from Merseyside.

A 22-year-old local man who was arrested on suspicion of possession with intent to supply cannabis is still in police custody. He was stopped along with a 39-year-old man after purchasing cannabis.

The activity also led to a 28-year-old man being arrested on suspicion of possession of criminal property after being stopped by police getting off a train.

A quantity of cannabis, class A drugs and £155 in cash were also seized from a 48-year-old local man near South Park. He was arrested on suspicion of possession with intent to supply class A drugs and has been released under investigation.

Detective Inspector John O’Driscoll, Cheshire Constabulary’s lead for the operation, said: “The operation was a joined up approach with neighbouring forces and partners to focus on individuals we suspect of travelling into Macclesfield from Merseyside due to being involved in drug criminality.

“This type of activity can happen at any time and should come as a warning to those who are intent on travelling into Macclesfield for criminal purposes.

“Both plain clothed and uniformed officers will continue to patrol the town and the road network to cause disruption to organised criminality in order to protect our local community.”

If you have information relating to drug activity taking place in your community please report it here https://www.cheshire.police.uk/tell-us or anonymously by calling Crimestoppers on 0800 555 111 and Cheshire Constabulary will do the rest.