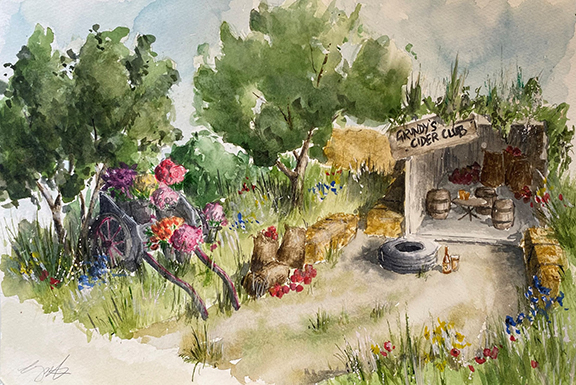 Marking 100 years of the BBC, BBC Gardeners’ World Live is set to showcase a series of special features in the Floral Marquee to celebrate the national broadcaster’s centenary year.

The four-day BBC Gardeners’ World Live event – which takes place from 16-19 June at Birmingham’s NEC – is an inspirational day out for all gardening enthusiasts, filled with beautiful Show Gardens, informative on-stage demos, live entertainment, shopping and appearances from the UK’s favourite gardening experts.

In this special year, the Show’s Floral Marquee will mark the centenary with a collection of displays inspired by popular BBC programmes – from The Archers and Peaky Blinders to Only Fools and Horses and Top of the Pops!

The celebratory features include a Pebble Mill inspired display that was personally designed by Peter Seabrook, who passed away earlier this year. The display, which is now being brought to life as a tribute to Seabrook and his long-running association with BBC Gardeners’ World Live, pays homage to the Pebble Mill at One show, which was filmed in Birmingham and hosted by Peter from 1975 until 1986.

Peter produced the design and illustrations for the display, as well as personally selecting Pebble Mill memorabilia to feature within. The display will include a myriad of new plant varieties and plants grown by local school children, two areas of horticulture that Peter particularly championed.

A Peaky Blinders inspired feature, designed by Alexandra Froggatt who was awarded Platinum for her ‘Watchmaker’s Garden’ at BBC Gardeners’ World Live 2019, is a moody and industrial space. The feature incorporates antique artefacts from the Black Country Living Museum where much of the series was filmed.

Taking inspiration from the iconic old dock yard space in the hit show, the feature includes a battered and weathered shack, which looks fitting for a Shelby, a safe for the gang’s valuables and a horse drawn ‘getaway’ cart, while the table is set for a hard-earned Whiskey.

Award-winning designer Paul Stone returns to the Show, with his first ever feature in the Floral Marquee, inspired by BBC Radio 4’s The Archers, which is recorded in Birmingham. Celebrating the BBC’s centenary, this unique display pays homage to the series through its legendary characters, the Grundy Family.

Alongside the infamous Cider Club, its bottles, barrels and benches this rural farmyard scene is replete with wild flowers, rambling honeysuckle, a gnarled and mossy old cider apple tree and the pony trap loaded with cut flowers – no doubt one of Eddy’s new ventures! A scene inspired by the engaging fictional world of The Archers, the garden is a celebration of the everyday story of country folk. Paul’s previous Show Gardens include the ‘Nostalgia Garden’ designed as a celebration of 50 years of BBC Gardeners’ World in 2017.

Other BBC-inspired displays in the Floral Marquee include:

Plus, the Floral Marquee tearoom gets a make-over this year as the Paso Doble Cafe, inspired by Strictly Come Dancing with music and ballroom dancing hosted by Stuart Holdham.

Additionally, The Marshalls Sustainability Show Garden design features a Corten–steel ‘100’ in a nod to the BBC 100 anniversary theme.

A one-stop shop of spectacular displays, quality plants to buy and seasonal inspiration, visitors can also enjoy an exciting schedule of talks and demos, Q&As with the BBC Gardeners’ World presenters, top tips and advice for every green-fingered enthusiast.

Rachel Poletti-Gadd, Portfolio Director at BBC Gardeners’ World Live, said “BBC Gardeners’ World Live is a wonderful opportunity for like-minded gardening enthusiasts to come together and celebrate the wonders of plants and the natural world. We’re delighted that our much-loved Floral Marquee will this year host a number of special displays to mark the BBC’s 100th year. From Top of the Pops to The Archers, I can’t wait to see how these iconic TV programmes have inspired some of our award-winning garden designers. It promises to be a must-see for every keen gardener and we look forward to opening the doors to this year’s event.”