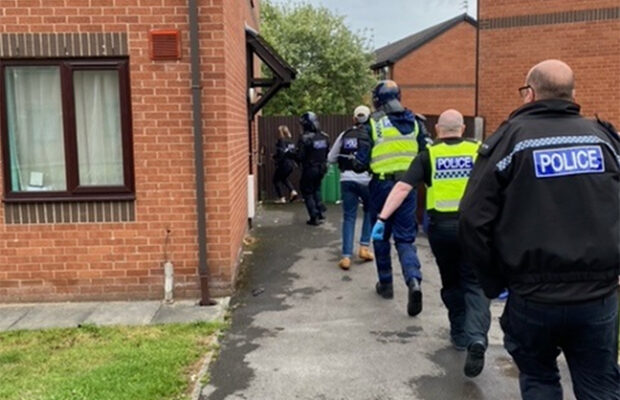 Following a series of high-value burglaries in the area, police officers from Cheshire Constabulary carried out a number of raids.

Earlier today, (Thursday 28 July), officers from the Macclesfield Proactive Team, with support of officers from Greater Manchester Police, executed warrants at three addresses in Wythenshawe and one address in Runcorn.

Two men, aged 43 and 32, along with a 36-year-old woman, were arrested on suspicion of conspiracy to commit burglary and are being held in police custody where they are being questioned.

Today’s warrants follow the arrest of a man and a woman, as part of the same investigation during a raid at an address in Wythenshawe on Friday 17 June.

During the incidents, a number of high-value items were stolen, including cars, cash, watches, jewellery and designer clothing.

Detective Sergeant Angela Coppock, of Macclesfield Proactive Team, said: “This morning’s warrants in Wythenshawe and Runcorn form part of our ongoing investigation into a number of high value burglaries across the east of Cheshire.

“Led by Macclesfield Proactive Team, the investigation relates to eight incidents where we believe more than one million pounds worth of property was stolen.

“We have been gathering evidence and intelligence behind the scenes and the extensive work has now resulted in the arrest of these people.

“I hope that this morning’s arrests provide reassurance to our communities, demonstrating that we are committed to doing all we can to tackle this type of criminality and ensuring that those who are responsible are held accountable for their actions.”